An E-mail From Steve Ferguson 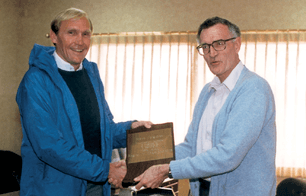 There has been a lot written about the extraordinary, successful, wonderful Bill Cook and his many accomplishments, but little about what was unusual and made him a one in a generation, one of a kind person that was a friend, brother, father figure, leader, mentor to so many. I thought that I might try to express what made my best friend, my brother, this exceptional person. I hope many of you can relate to my observations.

Bill was a people person. He was someone who you immediately knew cared about you as a person, how you felt, your goals, your joys and sorrows. He wanted you to be successful and reach your potential. You immediately trusted him. You realized how smart he was, but down to earth and never above you. He cared about who you were as a person not what you had. He was a person you trusted in personal ways. Bill always had high expectations for himself and those he touched. He could see the potential in people quickly but did not expect too much, as that would set them up to fail. He also was disappointed when people did not reach their potential. He expected everyone to be adults, responsible, to work hard, be on time (if you were early you were late), take pride in themselves and what they did. A major part of his expectation was that family was important. The person’s family and the Cook employee family. Bill could also identify almost instantaneously leadership potential. Find the leader and bet on the horse.

"He believed in close relationships with the customer and listening intently and regularly. He did not believe in strategic plans or management to budget. These things were restricting accomplishment and success. His budget was whatever it cost to accomplish the vision. But operations were lean, spend money like it is your own, thin layers of management, hands on, pay attention to detail and demand excellence. You build in excellence not inspect it." Steve Ferguson, Chairman of Cook Group

Steve talks about the time Bill Cook “stole” his Jeep.

Bill was a risk taker from most people’s view but to him it was a normal decision, but he quickly could change direction or cut losses. He had vision to see what could be, while the rest of the world saw things as they were. There was no mountain too big–change medicine, change FDA, change a community, change a state, bring back to life a resort, a town, a drum corps championship, a stage play for a Tony and an Emmy, a basketball championship, a research facility, medical device company, a Pharmica company, etc.

Bill was unbelievably observant. He could quickly walk through anywhere and see things that most people would never see. He would see the good, the bad and ugly.

Bill built relationships with friends, employees, customers, doctors, suppliers, politicians, Universities, coaches, drum corps members, family, that were deep and personal. He trusted them, would support them, expected it to be long term, flexible, handshake and trust.

Bill was filled with energy, flooded with ideas, driven and unable to stay idle. He channeled his energy into achievement of grand vision and ambitions to make things better–be it medicine, government, the company, employee benefits, or to save buildings and demonstrate adaptive reuse. He was destined to change the world around him.

Bill loved a good party where people enjoyed themselves and their accomplishments. He always wanted others to take the praise and would often be in the background, but always present. He wanted to celebrate people’s success. Bill was a man of action–do it, fix it, try it. He would support your decision and push the level of comfort to take risks and move forward. He established the core values for himself and the company and the people around him. He was fanatic about the core values and could express displeasure for violation very clearly. He could become easily irritated by minor obstacles. He believed in and promoted KISS. He would give people their head and support them. He was a doer and a fixer. He loved fixing a problem. He would learn everything about a project. 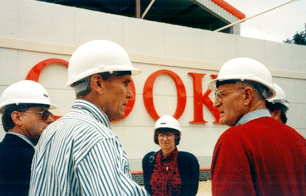 Bill was hands on, value driven, do what you are best at doing, simple form and lean staffing, and believed in productivity through people. He loved handcraft and had left the highly mechanized needle business.

He believed in close relationships with the customer and listening intently and regularly. He did not believe in strategic plans or management to budget. These things were restricting accomplishment and success. His budget was whatever it cost to accomplish the vision. But operations were lean, spend money like it is your own, thin layers of management, hands on, pay attention to detail and demand excellence. You build in excellence not inspect it.

He was competitive, and willing to take on a fight if he was right. He was not intimidated by anything or anyone.

Bill was that brother, that friend, that father figure, that we all respected and loved. The world, the state, the nation, the community, medicine are all lucky to have know him in our own way and to have been touched by this special, exceptional, generous, and loving person, Bill Cook.