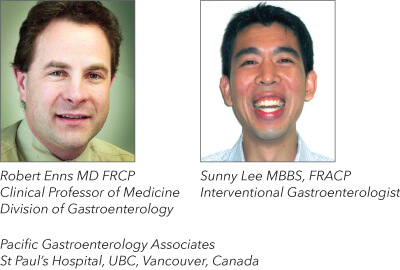 A 45-year-old patient who underwent a Nissen fundoplication six years prior for gastroesophageal reflux disease had heartburn symptoms for 20 years.

On endoscopy, the patient’s Barrett’s disease demonstrated a long segment (Prague Criteria C9M10) without nodules with areas of HGD at multiple levels extending throughout biopsy surveillance. Previous surveillance had demonstrated multi foci areas of LGD. We proceeded initially with RFA ablation using Halo 360 and, over the next twelve months, two further sessions utilizing a 90-degree catheter was performed to treat residual islands. During the last procedure, two co-located small nodules (at 35 cm from the incisors) were evident and were re-biopsied prior to RFA. This demonstrated persistent HGD. 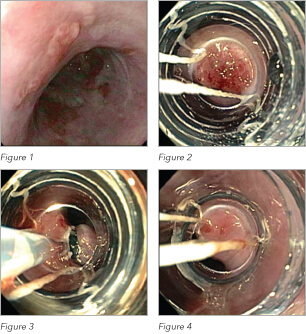 We proceeded with a follow-up procedure with planned EMR. Endoscopic examination demonstrated a small 1 cm tongue of Barrett’s esophagus at the gastroesophageal junction with some smaller patches of Barrett’s proximally. Cook’s Duette EMR apparatus was used to target the nodules and the first band placement captured the majority of the nodule and resected. Subsequent smaller areas of residual Barrett islands were also removed using the same EMR-ligation technique. At the conclusion of the procedure, the mucosa was inspected and a small raised area was located next to the defect from the nodule resection site. This was subsequently removed. Histopathological examination demonstrated areas of high-grade dysplasia within the nodule and a tiny focus of highgrade glandular dysplasia within the adjacent raised area.

The patient will return for a repeat endoscopic examination in three months time to review site of EMR and ensure Barrett’s eradication.

Endoscopic surveillance of Barrett’s disease with dysplasia needs to be stressed and surveillance cannot be ceased post performance of anti-reflux surgery.

Despite RFA therapy, this patient proceeded to develop highgrade dysplastic nodules. Whilst this case was slightly atypical with RFA ablation (in the absence of a nodule at commencement of treatment) preceding the need for EMR, ablative therapy (regardless of modality) should be utilized for eradication of abnormal Barrett’s epithelium but is insufficient for nodule management. This is especially pertinent given early malignancies are most common within nodules and EMR allows for definitive histological diagnosis.

The EMR-ligation technique is a safe and effective method in the management of Barrett’s oesophagus. As with all EMR techniques, the initial mucosal capture plays a key role in its success. After ligation capture, the captured mucosa should be inspected to determine whether abnormalities exist outside of capture, hence necessitating likely further resection of this area.

If treatment for Barrett’s with high-grade dysplasia is to commence, complete Barrett’s eradication needs to be the ultimate goal. To achieve this may eventually require multiple procedures and should continue until this is reached.