The History of Clips in Endoscopy

The first description of a clip used in gastrointestinal endoscopy was by Hayashi and colleagues more than 35 years ago in Japan in 19751 but it was Prof. Soehendra and his group in Hamburg, Germany, 20 years ago, who helped popularize the clip for hemostasis when the design of the delivery system had been improved.2 This was followed by reports of successful hemostasis with clips for bleeding from a variety of conditions from ulcers, Mallory Weiss tears, lesions and gastric tumors, to arteriovenous malformations, diverticula, small varices, hemorrhoids, sphincterotomy, polypectomies, failed endoscopic thermal or injection therapy and massive bleeding in ulcerative colitis (Figure 1).

In the 1990s, the mechanics of endoscopic clips were also recognized as useful for nonhemostatic applications such as closure of perforations throughout the GI tract, post-operative anastomotic leakage and prevention of post-polypectomy and post-EMR bleeding, marking for possible surgical resection, fluoroscopic-guided therapy and endoscopic repeat examination, attachment of feeding tubes and manometric catheters, closure of chronic fistulas, aiding cannulation during ERCP when the papilla lies within a duodenal diverticulum by placing traction on the duodenal mucosa to evert the papilla and fix it in an accessible position and to fix stents to prevent migration in the absence of a stricture. 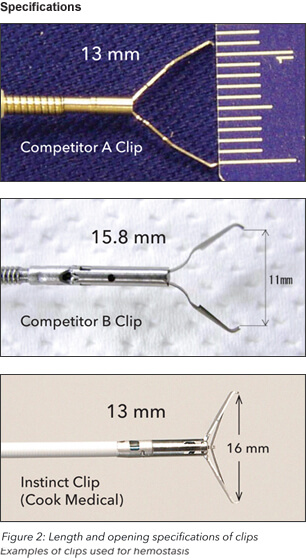 Clips work by forcibly apposing the clip arms so including a volume of tissue to achieve the goal of vascular compression or occlusion, in the case of hemostasis, or to close a defect, in the case of perforation, fistula or mucosal closure. From the very beginning of the clip era, there was clearly a need for certain attributes for clips and their delivery systems – ease of use, pre-loaded clips, reliable deployment, good mucosal adherence, good apposition of the arms, sufficient strength of the arms, rotatability, appropriate opening distance of the arms and good tissue retention. Initial designs were cumbersome, and performed inconsistently. Improvements appeared in the mid-1990s from the Olympus Company with the introduction of a reloadable clip, followed by the pre-loaded QuickClip in 2002 and rotatable QuickClip2 in 2005. Cook’s TriClip and Boston Scientific’s Resolution clip both were launched in 2003. In two comparative studies, investigators found that these clips had application times and failure rates that were very similar and all achieved 100 percent hemostasis. Retention times when measured across a four-week period varied widely though, with the Resolution clip performing the best. With no difference in ulcer, the conclusions were that the Resolution Clip seemed to have the most advantages.

At the end of 2010, a new type of clip, developed by Ovesco Endoscopy AG as an OTSC (over-the-scope-clip) device and commonly known as the “bear claw,” was introduced. Its design was fundamentally different from “through-the-scope” devices in that the clip is held on the outside of the tip of the endoscope until it is released, by a deployment much like a band-ligation handle. An experimental comparison between this clip and other more traditional clips available was reported on in 2012 using an ex-vivo porcine stomach model, the Ovesco clip required less time for placement and only one clip compared to two or more for the competitive clips to achieve hemostasis.3 The investigators concluded that the OTSC was superior to the other clips; this study, however, must be interpreted as an ex-vivo experiment and may not be directly transferable to human data.

The most recent addition to this field is a new clip by Cook Medical, introduced on a limited basis in the US in 2011. The Instinct Endoscopic Hemoclip* has similarities and differences from its predecessors. It has two arms with anchoring teeth and nitinol strips for added strength, controlled 360-degree bidirectional rotation, no plastic sheath, can be opened and closed multiple times and has a very simple, one-directional deployment mechanism. An experimental comparison between some of the mechanical features of the new Cook Medical clip and competitive devices was reported in 2012. The results indicated that the Instinct and QuickClip2 were impacted the least in a gastroscope in a retroflexed position, and both rotated equally well under many different gastroscope and colonoscope configurations as well as ERCP, whereas the Resolution lacked this ability except when the endoscope was straight. In terms of opening, closing, release (snapping) and closed-clip pulling forces, the Instinct was the strongest and performed best overall.4 The authors felt that these findings had important implications for endoclips in terms of therapeutic efficacy and retention.

Nearly two dozen studies have been conducted on the efficacy of endoclips since they where introduced in the 1980s. Studies, both randomized and non-randomized as well as retrospective case series, have compared clips to injection, thermal coagulation, clips alone and combinations of these therapies to evaluate primary hemostasis rates and rebleeding rates, with comparable results to the alternative therapies but, in general, a lower rebleeding rate with clips. In most studies, an average of three clips (range one to ten) were used per bleeding site and rebleeding rates of 2 to 20 percent were achieved with clips which were equivalent or better than the comparable treatments modalities.

Inadvertent perforation of the ulcer base is always a possibility with any metal-tipped device; as well, induction of or worsening bleeding is theoretically possible when clip application fails. Endoscopy teams need to be familiar with and well trained in the use of all clips in a unit since there are important differences and the situations in which hemostasis is required are often emergent. Fortunately, the learning curves are short. Endoscopic skill is necessary to understand which situations and lesions may be amenable to clipping, how far the endoscope tip should be away from the target and from which direction and angle the target should be approached. Clips used over an elevator of a duodenoscope require special expertise. Since patients requiring clip therapy may often require additional imaging, including magnetic resonance (MRI), it is important to understand that the Instinct Hemoclip was the first clip to be cleared by the FDA as MRI conditional, meaning there are no known hazards up to 3 Tesla.

Endoscopic clips have become one of the most important accessories in therapeutic practice. The most recent development of the Instinct Endoscopic Hemoclip has provided the endoscopist with a reliable tool for hemostasis and mucosal closure with potential advantages over other currently available devices. This device brings to the market a level of precision and control that was lacking with previous clip offerings.

*Used for endoscopic marking, hemostasis for mucosal/submucosal defects less than 3 cm in the upper GI tract, bleeding ulcers, arteries less than 2 mm, and polyps less than 1.5 cm in diameter, it is not intended for the repair of GI tract lumenal perforations.

1Hayashi I, Yonezawa TM, Kuwabara T, Kudoh I. The study on staunch clip for the treatment by endoscopy. Gastrointest Endosc 1975; 17:92-101

Previously published in The Channel.

Learn what makes Instinct™ the latest innovation in endoscopic clipping