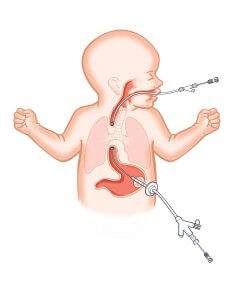 Bloomington, Ind. – Cook Medical announced today the availability of the Flourish™ Pediatric Esophageal Atresia device in the U.S. The device was granted authorization by the U.S. Food and Drug Administration (FDA) under the Humanitarian Device Exemption (HDE) for the treatment of pediatric esophageal atresia.

The Flourish Pediatric Esophageal Atresia device uses rare earth magnets that are inserted into the upper and lower ends of the infant’s esophagus. Over the course of several days, the magnets gradually stretch both ends of the esophagus, after which the tissue connects to form an intact esophagus. Previously, this condition could only be repaired surgically, but now doctors have another option.

In order to treat pediatric patients affected by this rare disorder, Flourish received approval from the FDA in 2017. Esophageal atresia affects around 1 in 2,500 newborns.1 Humanitarian Use Device (HUD) designations are reserved for the treatment or diagnosis of a disease or condition that affects fewer than 8,000 individuals in the United States per year. Between the time that FDA granted HUD designation in 2010 and approved the Humanitarian Device Exemption (HDE) for Flourish in 2017, 16 babies were successfully treated.

“We’re thrilled to be able to officially offer this minimally invasive approach for infants suffering with this condition to physicians in the U.S.,” said Barry Slowey, president of Cook Winston-Salem and vice president of Cook Medical’s Endoscopy specialty. “It has been especially rewarding to see the positive effects that Flourish has had on these children. An important part of our culture is to support patient populations that don’t have access to treatment options, which is why we worked with the FDA to establish the HDE pathway.”

For more information about other endoscopy products, visit cookmedical.com/endoscopy.

Data supporting the safety and probable benefit of the Flourish device include results from 16 patients who had the Flourish device placed. In the limited data provided, all of the infants had a successful joining of their esophagus, with no remaining gap, within 3 to 10 days after receiving the device. However, 13 of the 16 patients developed a complication that caused a narrowing in their esophagus (anastomotic stricture) that required a balloon dilation procedure, a stent or both to repair. Anastomotic strictures also occur from traditional surgery to repair the condition.

The Flourish device should not be used in patients older than one year or who have teeth, which may damage the oral catheter. The device is also contraindicated in infants who have an existing tracheoesophageal fistula or who have esophageal segments that are more than 4 centimeters apart. This device should not be used for the creation of an anastomosis other than in the esophagus, patients without an established and appropriately sized gastrostomy tract, or patients having gastrostomy site signs of significant infection. Potential complications that may occur when the device is in place include ulceration or tissue irritation around the catheter implanted in the stomach and gum irritation due to pressure from the oral catheter.