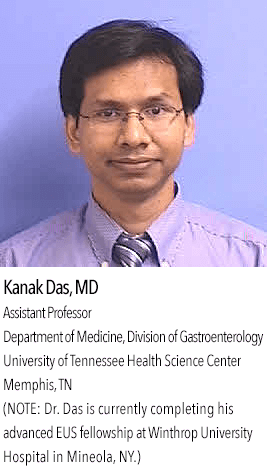 Lab findings were as follows: hemoglobin 9 g/dl, alkaline phosphatase 280 iu/l and total bilirubin 17 mg/dl. An abdominal US showed an 18 cm hepatomegaly with a nodular appearance as if a mass were present. An abdominal CT scan with contrast revealed innumerable liver lesions and multiple pathological regional lymph nodes worrisome for malignancy. An abdominal MRI / MRCP was significant for a large 10 cm x 7 cm liver mass occupying segment 2, 3 and 4 with a 2.7 cm hilar lymph node and diffuse intrahepatic biliary dilation, but the extrahepatic bile duct and pancreas were normal.

An ERCP performed for the obstructive jaundice showed a 3 cm stricture of the right hepatic duct with marked dilation of the intrahepatic ducts, and a total occlusion of the left hepatic duct. Biliary brushing from the stricture was collected. Then, using the Cook Medical Evolution biliary uncovered SEMS, the right-sided stricture was stented, which decompressed the biliary tree. Interventional radiology placed a left-sided external biliary drain, but failed to traverse the left-sided stricture.

Deep biliary cannulation was achieved on the first attempt using a Fusion OMNI Sphincterotome with DomeTip together with a .035”-260 cm Acrobat 2 Calibrated Tip Wire Guide. Potential contributing factors for successful cannulation included the DomeTip of the Fusion OMNI-Tome, which can ease passage through the irregular surfaces within the ampulla, as well as the body of the Acrobat 2, whose stability helped maintain access once it was achieved. The wire guide’s endoscopic Mark V System enabled visualization of the depth of insertion and was used to determine the location and length of the stricture to be stented.

Two stents were used to bridge the hilar stricture since the affected location was high into the intrahepatics. By overlapping two Evolution stents, we traversed the hilum to the papilla.

The patient’s bilirubin gradually improved to 3 mg/dl prior to discharge. The biliary brushing result was negative, but the biopsy of the liver mass was positive for hepatocellular carcinoma, and he was scheduled to undergo appropriate chemotherapy upon discharge.