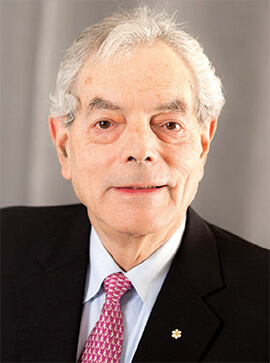 Can a single individual transform the practice of medicine? Colleagues of Norman Marcon, a professor and prominent Toronto gastroenterologist, say the answer is a resounding “yes.”

At the time that Prof. Marcon entered the medical profession, there was limited use of therapeutic endoscopy in Canada. Instead, gastroenterology was an offshoot of internal medicine focused on pathophysiology. Prof. Marcon was the first Canadian clinician to realize the true promise of the procedure, and he made it his top priority.

Though hospitals found endoscopy too costly, colleagues saw it as too risky and surgeons determined it was a threat, Prof. Marcon persisted. He began by converting a patient room at Wellesley Hospital into a makeshift endoscopy suite and working closely with Cook Medical to develop much-needed tools. Ultimately, he convinced a reluctant medical profession of the value of endoscopy through hundreds of talks, forum chairs, demonstrations, book chapters and articles.

Prof. Marcon has been at the cutting edge of every advance in endoscopy since. He pioneered endoscopic treatment of mucosal angiodysplasia, appreciated the potential of electrocoagulation to stop gut bleeding, exploited endoscopic technology to treat malignancies and became a leading expert in endoscopic mucosal resection.

Thanks to Prof. Marcon, Canada is a leader in endoscopy today, and the profession is forever changed.  He was recently honored for his work by being named an Officer of the Order of Canada, one of the nation’s highest civilian honors.

To learn more about Prof. Marcon and his contributions, read the article “Celebrating an endoscopy champion” in Cook Medical’s Channel Newsletter.

Medal photo courtesy of Rideau Hall. ©Her Majesty The Queen in Right of Canada represented by the OSGG, 1992. Reproduced with permission of the OSGG, 2015.

Prof. Norman Marcon is not a paid consultant of Cook Medical.