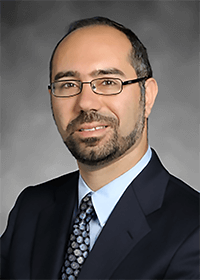 A 57-year-old patient was recently diagnosed with rectal adenocarcinoma and was referred for rectal ultrasound for staging. Fiducial markers placement was requested by radiation oncology if the patient has locally advanced disease. The initial examination was done using a radial echoendoscope. The patient had a semi-circumferential mass that disrupted the muscularis propria but did not invade other adjacent structures. The patient was staged as T3N0MX.

A 22-gauge Cook EchoTip Ultra Fiducial needle was placed in the linear echoendoscope. This needle is preloaded with 4 fiducials. The echoendoscope was passed into the rectum beyond the mass. The upper edge of the mass was identified by the sudden mucosal thickening. The needle was deployed into the upper margin of the tumor mass under ultrasound guidance and then slightly retracted to create a small track. The fiducial was deployed by advancing the stylet forward and was visible as a hyperechoic strand.

The EchoTip Ultra Fiducial Needle was retracted into the scope and the echoendoscope was rotated slowly until the first fiducial marker disappeared from view then another fiducial was deployed in the same position. The echoendoscope was then pulled until the lower margin of the tumor was identified by the visual and ultrasound views.

Dr. M. Fuad Azrak is not a paid consultant of Cook Medical.