From concept to reality

The story behind the launch of the EchoTip ProCore illustrates the power of collaboration between physicians and medical device development teams. The new innovation began as many breakthroughs do – with a problem. Previous needle designs had made it hard for GI practitioners to acquire sufficient tissue for diagnosis. They often found themselves making multiple needle passes or resorting to more invasive techniques.

But Drew Schembre, MD, Chief of gastroenterology at Seattle’s Swedish Medical Center, had an idea. By removing part of the needle wall and adding a cutting edge angled backward, it might be possible to collect more tissue as the needle was pulled past the site to be sampled.

During a medical conference, Schembre shared simple, hand-drawn sketches of what he had in mind with his local Cook sales rep, Leslie. It was the beginning of a collaborative relationship between Schembre and Cook that has since benefitted thousands of patients around the world – producing improved cytological yields in less passes potentially leading to faster and more consistent diagnoses. 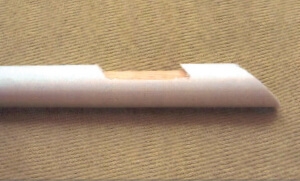 Dr. Schembre made his prototype from 2-inch PVC. 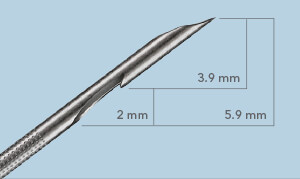 A multidisciplinary team of Cook specialists worked with Schembre to bring the new needle design to life, from research and development engineers to product managers. Their first step was to create a working prototype. Schembre gave the new needle a test run on a rudimentary anatomy model he fashioned from chicken, PVC pipe and a bucket of water. It appeared to perform precisely as he predicted, clearing the way for refined prototypes and eventually bringing the EchoTip ProCore to market to perform many successful procedures.

Schembre is gratified to see how his “aha” moment has benefitted physicians and their patients, and he credits the collaborative support he received from Cook with its success. “They welcome input from the clinician community using devices on a daily basis,” he says. “They have always believed end users can have good insights into how to build a better mousetrap,”

To read more of the story behind the launch of EchoTip ProCore, see the “Innovation through Collaboration” article in our Channel newsletter.

Dr. Schembre is a paid consultant to Cook Medical regarding the research and development of medical devices.