Country Music Artist Wade Hayes Has Used His Battle with Stage IV Colon Cancer to Inspire and Inform Others.

“We’ll know something Thursday.
That’s what the doctors said.
We’ll see what we’re dealing with.
We’ll see how far it spread.” 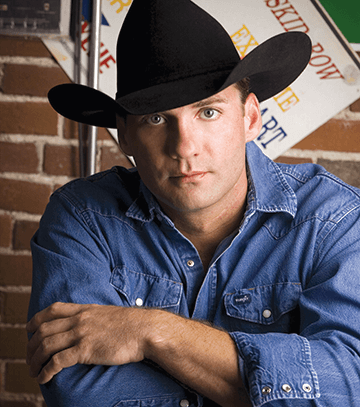 Throughout history, songwriters have used music to express both the pain and joy of the human experience. The airwaves are filled with songs that address love, heartache, friendship, grief, playfulness and longing. But very few deal with concrete realities like cancer.

Hayes is a country music singer and songwriter who has been a presence in Nashville for nearly three decades. In fact, you’ve probably heard one of his many No. 1 singles, which include “Old Enough to Know Better,” “On a Good Night” and “What I Meant to Say.” While much of his earlier music dealt with coming-of-age themes like partying hard and losing first loves, Hayes’ current work goes deeper, addressing topics such as mortality, regret, personal faith and sense of purpose. This shift happened when he was diagnosed with colon cancer, and it really hit him on a phone call with his doctor—a call he describes in his song “Is It Already Time?”

“The opening line of the song is exactly as it happened,” says Hayes. “At that point I knew there was a tumor, and I knew I had cancer, but the doctors didn’t know exactly how far it had gone. I clearly remember walking out of the hospital on that cold, gray November day and just sitting in my truck and staring—knowing that I was going to have to wait on the test, but also knowing my world had changed.”

Before that fateful day, Hayes had endured several years of bleeding and lethargy, both of which he dismissed. “At the time, I was really into weightlifting, and I just attributed the bleeding to the possibility of internal hemorrhoids,” he says. “I even spoke with a doctor friend of mine, and cancer wasn’t even a consideration. I was young, in great shape and had no family history of colon cancer. It just didn’t seem like it could be anything serious.”

Over time, another symptom presented itself—one that was harder to ignore. Hayes began experiencing severe abdominal pain, which was accompanied by much heavier bleeding than he had experienced in the past. His doctor had him undergo a colonoscopy, which revealed a tumor the size of an orange in his large intestine.

From that point, the news got worse. Hayes’ doctors discovered his cancer had spread to his liver. There, he had numerous tumors. Further evaluation of increasingly severe abdominal pain revealed intussusception, where a segment of the large intestine has telescoped onto itself causing obstruction and impairment of blood supply.

If not corrected, intussusception is deadly. So when it was found on a CAT scan, Hayes’ doctor recommended immediate surgery. “We had been trying to get a game plan together, but this threw us into emergency mode,” says Hayes. “Normally, they try to shrink the tumors before surgery, but with the intussusception, surgery was needed right away.”

Just a week and a half later, Hayes was in the operating room undergoing his first of many surgeries. Ultimately, he had between 60 and 75 percent (around 20 inches) of his colon removed. He then went on a six-month course of chemotherapy. He also underwent multiple intestinal reconstructive procedures complicated by large amounts of scar tissue.

Hayes had to cycle back through much of that process a second time when the cancer came back in his lymph nodes. But amazingly, he bounced back again.

“It’s always ongoing, but we’re very hopeful because I’m getting better every day,” he says. “By the end of last year, I could really tell I was starting to get my old strength back; I was starting to feel human again.”

The Power of We

As Hayes talks about his diagnosis and treatments, he uses the word “we” quite a bit. It illustrates the connectedness he feels with his care team, who he credits with pulling off “nothing short of a miracle.” He makes special mention of his surgeon, Nipun B. Merchant, MD; his oncologist, Jordan D. Berlin, MD; and his nurse practitioner, Jayme Flynn—all part of the Vanderbilt-Ingram Cancer Center in Nashville.

“The odds were not in my favor, so I’m very thankful to them,” says Hayes. “But it’s not just their expertise I’m grateful for; it’s also the care they showed me. It’s a huge deal to patients—especially ones in as much trouble as I was—to feel like their doctors and nurses truly care about their well being. Tenderness, compassion and respect make all the difference. With my team, I feel like I made genuine friends.”

Cancer changes people. Hayes says he felt it immediately: “The minute you hear you have cancer, your previous life is over—period,” he says. “Anyone who’s gone through this will know what I’m talking about.”

Ironically, Hayes says he had been praying for change just before all of this happened. “I was living for myself and my career, and just going from point A to point B,” he says. “So I prayed to become a better man. Then, this all happened and I thought, ‘well, God, I think I’ve got the message.’”

According to Hayes, his experience with cancer truly transformed him. He’s noticed it has increased his capacity for compassion and has also taught him how to make the most out of any situation.

As he adjusted to this transition in his life, Hayes relied on daydreaming, praying and songwriting. These are things that were particularly helpful when he found himself dwelling on statistics (the latest figures from the American Cancer Society put five-year survival rates for stage IV colon cancer at only 6 percent).

“When I was a kid in school, daydreaming always got me in trouble, but in my adult life it has helped me immensely,” says Hayes. “It has allowed me to leave bad situations and imagine when things will be better. So I daydreamed a lot, prayed a lot and wrote a lot. Those are the things that pulled me through.”

Writing is often a recommended coping therapy for people with cancer. But while most patients rely on journaling, Hayes channeled his thoughts into songwriting. At first, he wrote about the fears that come with facing cancer, but over time, he also found inspiration in healing.

As good test results started coming in, Hayes felt his optimism growing. His prayers were coming true and his daydreams were becoming reality. But it was something Dr. Berlin said that really motivated him.

“I found out I had been cancer free for a while, and it was starting to look like we could really whip this thing,” says Hayes. “It was then that Dr. Berlin said something that resonated with me so profoundly that I wrote a song about it. He simply said: ‘This is great news; go live your life.’ That was huge for me. Now I’m really trying to do the things that I only talked about before.”

Hayes has taken Dr. Berlin’s advice to heart, and his post-cancer life is filled to the brim. He’s touring again, including a stint with Country Music Cruise, and he’s working on a new album, which will include a song called “Go Live Your Life.” Hayes says he’s found the country music community to be nothing but supportive of him. And many of his fans have related to his cancer journey.

“At nearly every show I talk with someone about it,” he says. “We hug, we pray, we cry. Whether it’s their battle, or a family member’s, I know what they’re going through, and my heart hurts for them.”

Hayes is also devoting a great deal of time to colon cancer awareness efforts. He’s been involved with both the Colon Cancer Alliance and the Cancer Research Fund, providing interviews and radio spots highlighting the importance of colonoscopies.

Hayes points out that the recommended age to begin colonoscopies, age 50, would have still been too late for him. He was diagnosed with colon cancer at age 41 and had been experiencing symptoms for a couple of years before that. While his case is atypical, it does point to a need for earlier testing, he says.

“The bottom line is that I want people to get tested,” says Hayes. “There was no reason for me to have cancer, but I had it. So, yes, anyone over 50 should have a colonoscopy, but so should anyone of any age who is experiencing symptoms. It can be detected early, which is why I’m so vocal about this.”

Beyond his career and his work with cancer awareness groups, Hayes feels his most important mission in life is to never again take anything for granted—and he wants to help others do the same. “Don’t wait until you find out you have an illness as severe as mine,” he says. “Life is flying by.”

“Nurses have a hard job, and it takes special people to do what they do. They make a huge difference in their patients’ lives, whether they realize it or not. Even the little things, like a smile or a kind word, are so important.”

…on raising awareness of colon cancer

“It’s become like a second job. That’s how important it is to me.”

“I know a lot of people worry about the procedure, but there’s nothing to it. You just go in, feel really great for about 15 seconds, and then you wake up and it’s all over with. It’s nothing compared to what you’ll go through if you let cancer go undetected.”

…on coping with cancer

“There’s not an area of life it doesn’t take over. From working your schedule around your procedures to becoming dependent on other people to help you out of a chair, it’s all an adjustment.”

…on not taking life for granted

“It’s so much easier said than done. I know; I was the main offender. But I want to let people know that life is precious.”