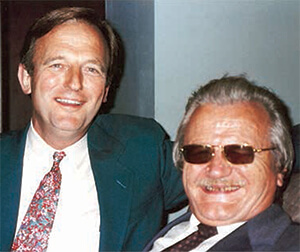 One of the interviews included in the second volume of the special edition of The Channel, celebrating 40 years of Interventional ERCP, was between Dr. Peter Cotton and Dr. Claude Liguory. Dr. Liguory continues to be the unmistakable face of French endoscopy.

Dr. Liguory started in surgery back in 1967 in Paris but gravitated to laparoscopy because, in his own words, “surgery took too long”. He decided to choose a specialty that used much more the hands than the brain. As there were no believers of endoscopy at this time Dr. Liguory taught himself and dedicated his work to flexible endoscopy.

Dr. Liguory first learned about ERCP during a lecture by Dr. Oi, the first Japanese physician doing ERCP. In November of 1971, Dr. Liguory completed his first ERCP and later traveled to Brazil to introduce the procedure.

A few years later, Dr. Liguory completed his first sphincterotomy. There wasn’t any material available in the market at this time, so he used a catheter and fishing wire to create his own sphincterotome! 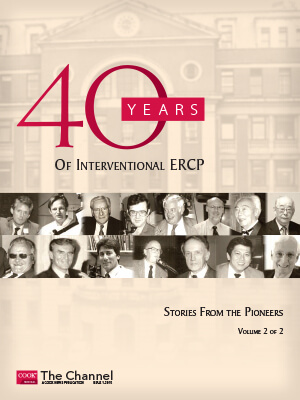 Dr. Liguory worked in various hospitals throughout his career, which allowed him to take new techniques and procedures to these hospitals. At Cochin Hospital in Paris, Dr. Liguory worked with Prof. Lucien Leger, who was head of the surgical unit. Prof. Leger was excited about new procedures, especially endoscopic papillotomy and Dr. Liguory did the first papillotomy for acute pancreatitis in 1979. A year later, he then performed the first endoscopic cystostomy while working in Prof. Leger’s department. The relationship between Dr. Liguory and Prof. Leger really helped further Dr. Liguory’s career. He was elected into the National Academy of Surgery in 1987 and two years later was named Professor of the Medical College of Paris Hospitals.

Dr. Liguory stopped practicing in December of 2007. He is truly one of the first pioneers of Interventional ERCP. We thank him for all of his contributions to the world of endoscopy.

Don’t miss the complete interview between Dr. Peter Cotton and Dr. Claude Liguory in Vol. 2 of The Channel.