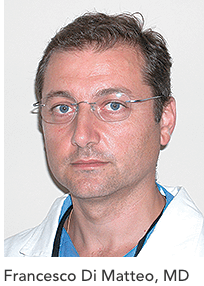 A 73-year-old patient was referred to us with a “painless” obstructive jaundice and pruritus secondary to a solid lesion of the pancreas. The patient was admitted to our unit with MRI and CT-scan imaging of a solid lesion of the head of the pancreas with signs of vascular involvement of mesenteric vessels and bile duct obstruction and no certain metastasis. The patient’s underlying diseases were diabetes and hypertension. A blood test showed: AST 168 U/L, ALT 79 U/L, γ-GT 1066 U/L, ALP 650 U/L, total Bilirubin 21.52 mg/dL, and dir. Bil. 14.54 mg/dL.

Under deep sedation with propofol, the patient underwent ERCP that failed for a tight stricture of the second part of the duodenum. During the procedure we decided to place a duodenal 6 cm Evolution stent (Cook Medical EVO-22-27-6-D) after a measurement of the length of stenosis with the guide catheter (Cook Medical SIS-10). The deployment of the Evolution stent under fluoroscopy was comfortable as usual.

After two days an ERCP was technically unsuccessful as the papilla was inaccessible despite probing within the duodenal stent. Thus, EUS-guided puncture was performed transgastrically into the left intrahepatic ducts. A linear array echoendoscope was placed near the gastric lesser curve allowing visualization of a dilated left hepatic duct.

To continue reading this article, download the PDF here.

Dr. Francesco Di Matteo was not a paid consultant of Cook Medical at the time of this publication.

Sign Up. Get Email about News, Products, and Events from Cook Medical.