Hello. I’m Victor Havill, a marketing manager with Cook Surgery. I just returned from SAGES 2014 in Salt Lake City and thought I’d share something about the experience.

First of all, I’d like to commend SAGES on its selection of venue. Salt Lake City is one of the most picturesque cities in the country. It seems that everywhere you look is a beautiful, postcard-worthy view.

Getting around is easy too.  For a mere $2.50, you can take the train from the airport directly to the Salt Palace Convention Center. The train takes only about 15 minutes and—compared to a cab—will save you 20 dollars.

Apparently, there is lots of great skiing there as well, but no time for that! We were there to learn and work.

Cook representative Aaron Stephens and Vice President of Surgery Andy Cron posed during some downtime at the Cook booth (see below). We met plenty of surgeons this year and had great discussions on Biodesign and minimally invasive surgery.

SAGES this year featured sessions on a couple of subjects that piqued our interest: common bile duct exploration—or as we call it, CBDE—and laparoscopic hernia repair. SAGES is a society that is on the cutting edge of minimally invasive surgery, and it’s great to be a part of a company that aligns perfectly—past, present and future—with this trend. 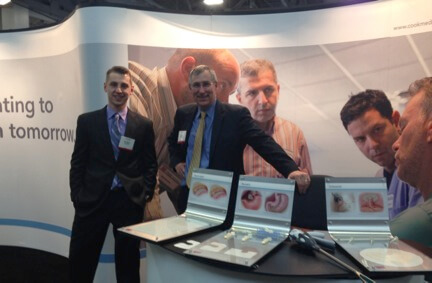