We at Cook Medical love to engage with customers and industry partners on social media. (You can find us all here.) 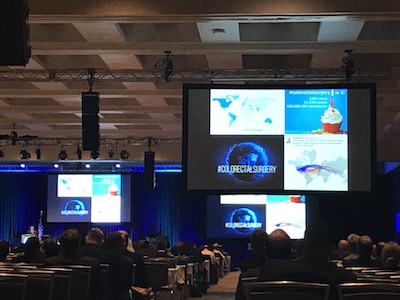 Dr. Richard Brady talks about #colorectalsurgery and Twitter at ASCRS.

Social media has already made a big impact for surgeons. To see it for yourself, take a look at the #colorectalsurgery hashtag. According to Dr. Richard Brady, it has seen more than 3,400 users and 31,000 tweets in its first year. Or take a look at the #Ilooklikeasurgeon hashtag, which started in August 2015 and is still going strong. Tweets get especially fun during academic meetings and congresses. By using hashtags like #ACSCC16, #ACPGBI2017, and #ASCRS17, you can easily engage with fellow attendees or follow the event from home. These event hashtags seem to be growing. According to this tweet by Dr. Sean Langenfeld, the #ASCRS17 hashtag was tweeted 6,723 times this year. In 2015, the #ASCRS15 hashtag was only tweeted 944 times.

During the recent tripartite meeting of the American Society of Colon and Rectal Surgeons (ASCRS), several surgeons spoke about their experience with social media.

In his talk, Dr. Winter explained how little we know about the world of science. Social media lets us connect with each other to share the bits of information we do understand. “Even when we have fantastic evidence, it doesn’t penetrate,” said Dr. Winter. “It doesn’t penetrate because it has no influence. This is precisely what social media can do now. Social media can influence the way we think about the evidence that’s already there. It doesn’t change the content, but it gives you access to it.”

On social media and on physician-rating sites, some surgeons occasionally see disgruntled posts. Dr. Langenfeld suggests not responding on the digital platform. “You’re fueling the fire. They’re looking for a response out of you,” said Dr. Langenfeld. Instead, he suggested addressing patient concerns in person. He also suggested developing an online defense. “Provide as much positive information as possible between the online consumer and unregulated [physician-rating] websites.”

Many surgeons experience information overload. Some feel pressured to stay connected at all times. This can lead to burnout. “Social media has great utility, but it’s addictive. We need to limit our use,” said Dr. Brady. The brain reacts strongly to novelty, and each notification we see on social media boosts dopamine levels. “You need to train your brain to focus on tasks for a longer period of time without distraction.” Dr. Brady offered some tips. “Use shorter and less emails. Remove your phone from your bedroom at night. Don’t blindly scroll through your timelines.”

If you have any more thoughts on this, let us know. Tweet us at @CookSurgery.