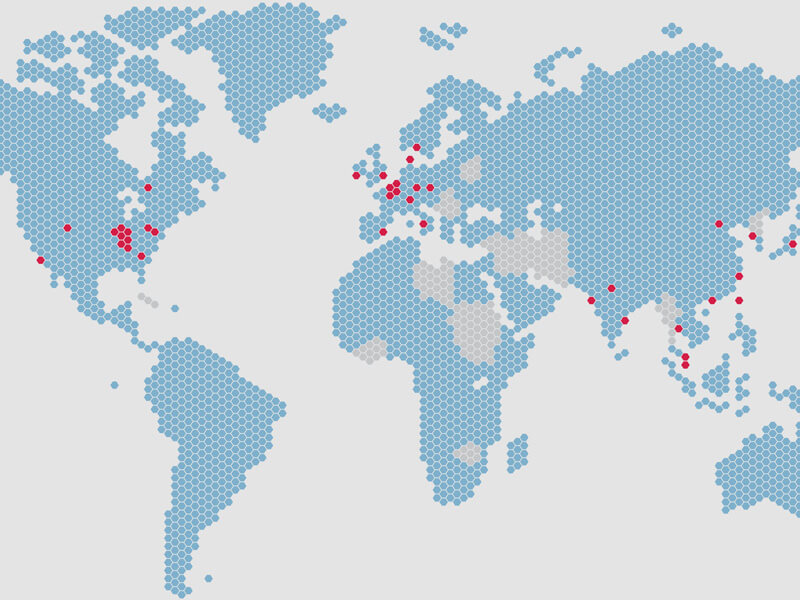 Cook’s locations around the globe

In an era when US businesses were less focused on international markets, founder of Cook Medical, Bill Cook, was a maverick with a passion for providing physicians with potentially lifesaving medical devices for their patients. This passion spurred Cook’s expansion around the world and created a solid foundation of international success and booming medical device sales.

Business development in EMEA (Europe, the Middle East, and Africa)

From 1963 to 1969, Cook’s product portfolio rapidly grew from an original 4-page catalog to 100 pages of new products. Bill Cook began considering expanding in Europe. Cook products were already being sold in France and other European nations during the 1960s, and in April 1969, incorporated as William Cook Europe, our Cook Denmark location was established in Copenhagen with two dedicated employees. This was Cook’s first operation outside the United States to manufacture and distribute Cook devices for European and other non-US markets. 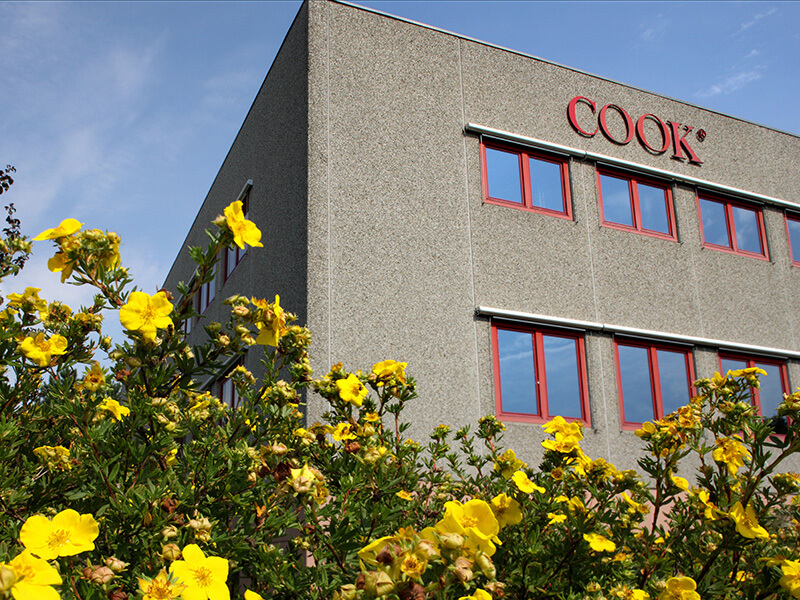 Cook Denmark quickly outgrew its Copenhagen plant in 1972 and moved to a newly remodeled facility in SØborg, Denmark. Within ten years, the company relocated to a larger, 7,000-square-foot facility in Bjaeverskov, Denmark. Today, Cook Denmark employs more than 800 people, maintaining a key role in Cook’s global enterprise.In 1979, with Cook’s goal to maintain direct medical device sales instead of sales through outside distributors wherever possible, the company’s first European sales subsidiary opened its doors in Spain. This highly successful sales division served as a model for future sales offices in Europe in the early 1980s, including offices in the United Kingdom, Germany, Italy, Sweden, and France. Cook Denmark expanded sales opportunities in Luxembourg, Switzerland, Belgium, and the Netherlands in the mid-to-late 1980s, further establishing strong sales channels within the European nations. 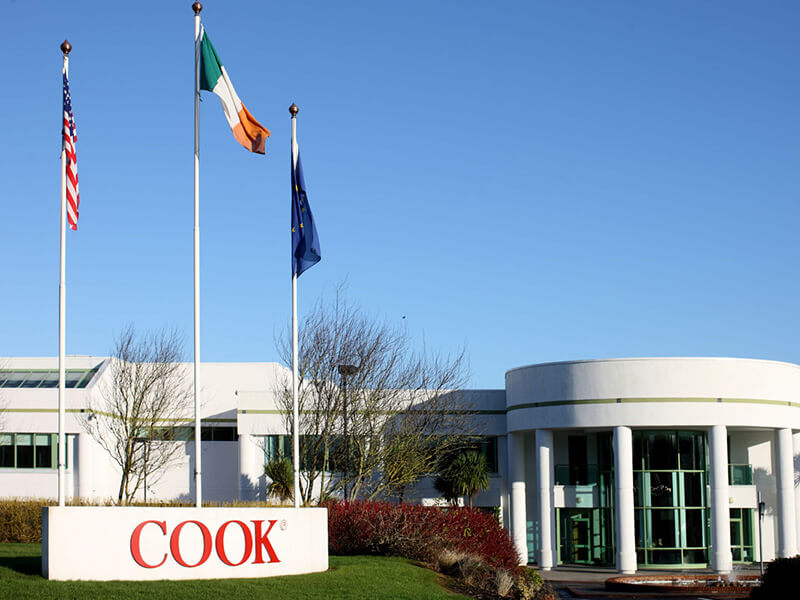 In Limerick, Ireland, Cook found a central and critical base for European sales and manufacturing. The Cook Ireland facility opened in 1996, and it now provides 10% of Cook’s global manufacturing and employs about 800 people. Cook Ireland celebrated the opening of the Innovation Center in 2013, giving their large team of engineers a state-of-the-art facility to conduct medical device research and development in the European sector.Over the decades, Cook has advanced its regional reach from the start-up Denmark operation in 1969 to partnering with local physicians to develop products to meet their patients’ needs across many nations in Europe, the Middle East and Africa (EMEA).

With Cook devices in use throughout the Americas and EMEA, Bill looked to broaden Cook’s reach to physicians and patients in the APAC region. In 1978, through an informal handshake, Bill and Ernie Hughes, owner of Hughes Medical, began to distribute Cook’s catheters, sheath sets, wire guides, and needles in Australia, New Zealand, and Southeast Asia and began to seek distribution partnerships in Japan and Hong Kong. A year later, Cook bought Hughes Medical, renaming it William Cook Australia, and began a new expansion into APAC territories. One of the first Cook APAC extensions outside of Australia was the 1986 opening of Cook Southeast Asia in Singapore followed by Cook India in 1987, founded as a subsidiary of Cook Singapore.

Cook established its first company in China in 1988 with the opening of Cook Asia Limited in Hong Kong. The Hong Kong company quickly became a strategic link for Cook’s medical device distribution in the Chinese market. The sales and distribution successes within the APAC region prompted office openings in multiple locations, including Taiwan in 1989, Asia/Malaysia in 1990, Japan in 2004, Korea in 2007, and Thailand in 2009.

Cook also continued to grow in mainland China, establishing an office in Beijing in 1996, and in 2008 the Cook China Operations Headquarters in Shanghai was officially put into operation. In 2009, when China became Cook’s second largest market in the world, the Cook China Distribution Center (CNDC) was established in the Wai Gaoqiao Free Trade Zone outside Shanghai. The warehouse is capable of efficiently delivering Cook’s products to hospitals all over China. In July 2019, in order to provide customers with more flexible logistics and distribution solutions, CNDC was relocated to Shendong Road of Pudong New District. 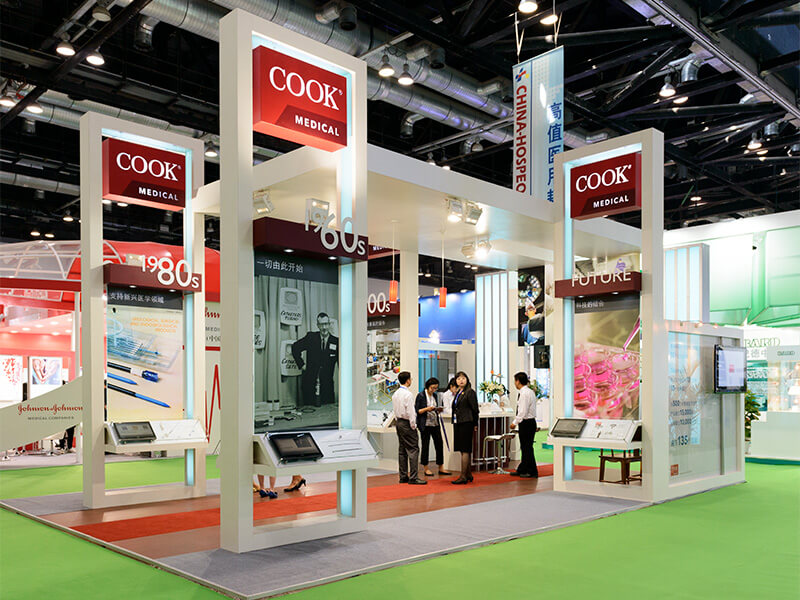 As patient needs for treatments continue to grow in APAC, Cook will continue to expand in the region to ensure important products are available.