A recipe for giving 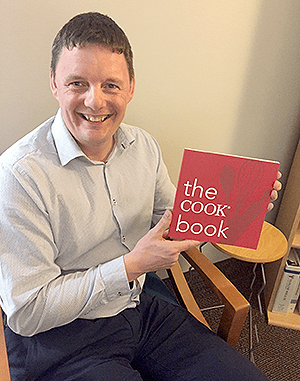 The Cook book project, initiated by Keith, Senior Product Manager for Cook’s Endoscopy division, was widely embraced by his colleagues and other Cook Medical employees in Ireland.

With over 520 copies sold and €5200 raised for Cliona’s Foundation in Limerick, this simple red book, titled “the COOK® book,” created by Cook Medical’s Endoscopy division, is more than just a pun. It’s a way for the company to give back to the community.

Over the past several years, the division has supported several initiatives aimed at helping charities, including hosting cancer awareness days at the Cook Ireland facility to raise money for local and national charities. At one point, the company even set aside a portion of sales profits for a specific period to go towards a good cause. Given the company’s penchant for lending a helping hand to charities, Cook Ireland’s employees embraced the idea of contributing to a charity cookbook.

When researching a worthy recipient for proceeds from the cookbook, Cliona’s Foundation stood out to Cook’s employees. It is a charity that does not focus specifically on cancer research but rather takes a more pragmatic approach by providing financial assistance for non-medical expenses to families who have children living with critical illnesses. Prior to publishing the cookbook, employees in Cook have supported Cliona’s Foundation through many fundraising efforts. 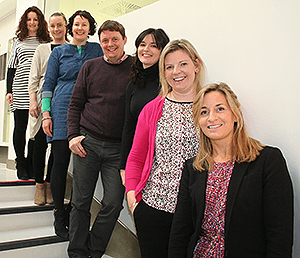 The Cook Ireland Endoscopy team that worked together to produce the Cook Book.

Creating the cookbook was truly a team effort, requiring the support of the whole Endoscopy team in Ireland, as well as other Cook Medical colleagues located in the Ireland facility. It took some time and did not happen overnight, but when the book was finally produced, it was released at a perfect time, just before Christmas. Many Cook employees purchased it for loved ones and encouraged friends to also pick up a copy.

The book contains 47 recipes, enough to serve up a wide variety of three-course meals right at home. With dishes ranging from Sweet Potato Coconut Curry to Kaiserschmarr’n, the Cook book has a global flavour, making it an apt reflection of the workforce diversity at Cook Ireland.