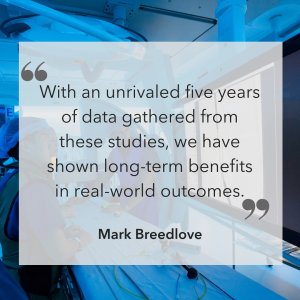 Study finds 91 percent freedom from TLR at one year and 76 percent at five years, including complex lesions

Bloomington, Ind. – Cook Medical introduced the results from an aggregated data analysis at the Vascular Interventional Advances (VIVA) conference, highlighting the Zilver® PTX® Drug-Eluting Peripheral Stent (DES) benefits in challenging patient populations. When considering various patient and lesion factors, the analysis concluded that risk factors such as Rutherford classification, sex, calcification and diabetes did not have a significant impact on the target lesion revascularization (TLR) rate in patients treated with the Zilver PTX stent.1

“It’s generally thought that sex, calcification and diabetes may have an impact on TLR, but this data demonstrates that these factors do not,” said Mark Breedlove vice president of Cook Medical’s Vascular division. “In this global analysis of Zilver PTX patients, these characteristics did not have a significant impact on TLR.”

The global data analysis on the world’s first drug-eluting stent in the superficial femoral artery (SFA) included nearly 2,400 patients from 16 countries who participated in one of five Zilver PTX studies. This included three pre-market studies in North America, Asia and Europe and two post-market studies in the United States and Japan.2,3,4 The study sought to identify the impact of patient and lesion factors on freedom from TLR at one year. The results indicated that factors typically impacting reintervention rates did not have an impact on the reintervention rates for patients treated with the Zilver PTX stent.

“With an unrivaled five years of data gathered from these studies, Zilver PTX has shown long-term benefits in real-world outcomes. This is a significant amount of data that informs how we continue to work alongside physicians to fight this disease,” said Breedlove. “We’re committed to helping patients who deal with the impact of PAD on their lives.”

Zilver PTX5 was the first DES in the United States used in the treatment of PAD and is the only drug-eluting superficial femoral artery stent with five-year data. As previously published, patients treated with the Zilver PTX stent achieved a higher percentage of freedom from TLR compared to standard of care endovascular treatment, resulting in 91 percent freedom from TLR at one year and 76 percent at five years.2 Zilver PTX has been shown to cut reinterventions by nearly half through five years compared to both bare metal Zilver stents and a combination of bare-metal Zilver stents and percutaneous transluminal angioplasty (PTA).2

Drs. Dake and Yokoi are paid consultants for Cook Medical.