Members of Cook’s Peripheral Intervention team have been shining a spotlight on critical limb ischemia (CLI) by hosting round tables to educate podiatrists on peripheral arterial disease (PAD). Podiatrists are often the first physicians to treat patients who are suffering from lower limb ischemia, but may not always know what they are seeing.

The purpose of the round tables is to engage podiatrists in discussions about the symptoms of PAD and to educate them on minimally invasive treatment options. Endovascular specialists—including interventional radiologists, interventional cardiologists, and vascular surgeons—are equipped to appropriately treat PAD patients with CLI disease. A goal of endovascular therapy is to prevent amputations, which result in a 50% death rate within five years. 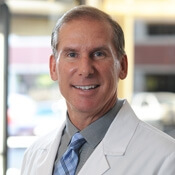 During a Cook-sponsored round table last fall, a Cincinnati podiatrist and his partner realized that a difficult CLI case they had recently encountered could be treated endovascularly. The patient was a very active 70-year-old woman who was unable to walk because of excruciating pain from a deep ulcer on her foot. The podiatrist referred her to a vascular specialist, who said that nothing could be done for her and that she would probably lose her foot. The specialist neglected to perform an angiography to determine the extent of her disease.

After receiving the diagnosis, her podiatrist offered one more option, if she was willing to see another physician who was located fairly far from her home–on the opposite side of Cincinnati. She agreed and was referred to Dr. Andrew Hearn, a vascular surgeon at Mercy Health Physicians in Cincinnati.

“Many surgeons aren’t trained to do endovascular procedures, so if they can’t do it, no one can,” Dr. Hearn said. “It’s also a matter of ego and not wanting to give up the case.”

Dr. Hearn performed the much-needed angiography and determined that he could open her blocked artery with an endovascular procedure. Within a couple of hours, her pain was gone, and she could walk for the first time in six months.

“This is why people die. They go from being active to becoming sedentary, and things spiral from there,” Dr. Hearn said. “Her prognosis is excellent. Her ulcer is almost completely healed, and she feels like she has her life back.”

Dr. Hearn said he has seen many patients who have been told that amputation is the only option. The majority of the time he is able to prevent that outcome through endovascular therapies.

He related the story of a Lexington, Kentucky, farmer who was told that he needed an amputation. “He said he might as well just die rather than get his leg cut off,” Dr. Hearn said. “He was sent to me, and we were able to open up the arteries below the knee, and his ulcers healed. He was able to farm again!”

According to Dr. Hearn, the key to preventing amputation is knowing that something can be done now, performing selective angiography, treating with antiproliferative therapies such as Zilver® PTX® (in the superficial femoral artery) and now drug-coated balloons, and using appropriate crossing catheters and wire guides.

“My go-to microcatheter is the CXI™. It is a remarkable tool that has helped me like never before,” he said.

“This is a culmination of what we have all been working for, translated into the saving of an active person’s limb and life,” Dr. Hearn said.

Melissa, a manager of corporate development in Peripheral Intervention at Cook, later spoke about the case to Dr. Alan Block. Dr. Block is Cook’s key speaker during podiatry/CLI round tables who serves as clinical assistant professor of orthopedics at The Ohio State University.

“He was elated!” she said. “Educating these podiatrists is the key. They don’t realize all the options they have in front of them.

“And, it just proved to him once again that the heel is the heart of the foot.”

Dr. Hearn is a not paid consultant of Cook Medical.

Dr. Block is a paid consultant of Cook Medical.