In March of 2013, David Hucks and Jay Hodde of Cook Biotech went on a humanitarian trip to Uganda to repair fistulas. Women from around the area who suffered from urine leakage visited the clinic. In five days, David and Jay’s team performed 44 surgeries.

David shared with us a powerful and poignant story from his trip. 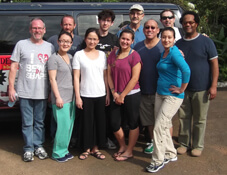 David, Jay, and rest of the clinic team 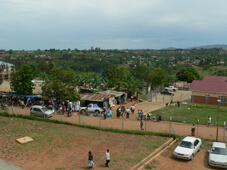 The primary cause of vesicovaginal fistula is prolonged obstructed labor that can last for days and destroy the mother’s tissues, and often results in a stillborn baby.

Our first patient had a fistula at the bladder neck (which is a pretty tough area to repair) that was caused by an obstructed labor 10 years ago. Imagine constantly leaking urine for 10 years! The obstructed labor also resulted in a stillbirth and the complete destruction of her uterus. As a result, she was unable to ever have another child.

She was prepped for surgery and received her spinal anesthesia. We waited for it to take effect. During this time, she sat on the table alone, under the lights. Alone, that is, except for an infant warmer and a scale that is used for newborns.

In the next room, an emergency caesarean section was finished up. Both the mother and the baby were fine. The nurse took the baby from the mother to clean. The nurse then placed the baby in the warmer—namely, the warmer in the room where our fistula patient of 10 years sat awaiting surgery.

I walked into the room and was brought to tears as I saw our patient staring at the baby in the warmer. It was an intense stare, and no emotion—only intensity—showed on her face. She was unable to move on the table or turn away, because of her spinal block.

We began the surgery. As we operated, we asked her through an interpreter when her last period was. She said that it had been 10 years ago, before her pregnancy.

We continued to repair her fistula, and the patient continued to talk in her local dialect. “She is asking when she can have another child,” the nurse told Dr. Tom. We didn’t answer. We didn’t want to tell her while she was on the table.

Several of us opted to leave the room for a bit to collect ourselves. We knew that a young woman with a fistula and without children in this culture is cast aside, divorced by her husband and family, and can never fully participate in society again.

She will never have a use for the baby warmer and the scale. But she does have a blank, intense gaze filled with a longing and desire that is never, ever, to be fulfilled. 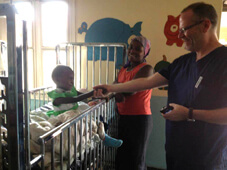 David with a young girl in Mbarara