A review of this devastating complication including incidence rates after TEVAR for TBAD and the roles of left subclavian artery revascularization, aortic coverage, and cerebrospinal fluid drainage.

Paraplegia is a devastating and unpredictable clinical syndrome that remains an important consideration in the management of type B aortic dissection (TBAD). Although spinal cord ischemia (SCI) can manifest as a de novo sequela of TBAD at presentation, it is encountered more frequently as a complication of both endovascular and open TBAD repair. Systematic reviews have suggested SCI rates of up to 4% for undifferentiated patients undergoing endovascular repair of TBAD1,2; however, significantly higher rates have been reported, especially in case series dealing with acute presentations.3

A complex interplay of factors impacts the likelihood of SCI complicating endovascular repair of TBAD. The blood supply of the spinal cord arises via a variety of different vascular territories, including the intercostal, lumbar, left subclavian, and internal iliac arteries.4 Disruption of the blood flow from any of these territories reduces perfusion to spinal cord neural tissue, increasing the risk of SCI. As such, the extent of aorta covered during thoracic endovascular aortic repair (TEVAR), patency of the left subclavian artery (LSA) and internal iliac arteries, and perioperative blood pressure are just some of the factors that affect the periprocedural risk of SCI. Patients who develop paraplegia after TEVAR have a poor long-term functional outlook and significantly reduced life expectancy.5

COMPARATIVE PARAPLEGIA RATES AFTER TEVAR FOR TBAD AND ANEURYSMAL DISEASE

Published literature to date suggests that SCI rates after TEVAR for TBAD are lower than for TEVAR carried out to repair thoracic aneurysms, with rates of 4% reported for the former and up to 10% for the latter.6,7 The EUROSTAR registry reported outcomes from 606 patients who underwent TEVAR, of whom 291 were treated for aneurysmal disease and 215 for TBAD.8 Fourteen patients in this cohort experienced SCI postoperatively: 11 (3.8%) in the aneurysm group and three (1.4%) in the dissection group. The reasons for these reported disparities are likely multifactorial. The lower burden of mural atheroma and thrombus in TBAD presents a lower risk for atheroembolism after manipulation in the aorta. Another factor that may contribute to lower SCI rates in TBAD is that some false lumen perfusion often persists after TEVAR, either maintaining perfusion through the intercostal arteries or allowing time for collateralization. In contrast, the aneurysmal aorta is promptly sealed after TEVAR with rapid sac thrombosis and cessation of flow through the intercostal arteries before requisite collaterals have developed.

RISK OF PARAPLEGIA AFTER TREATMENT OF ACUTE AND CHRONIC TBAD

Treatment of TBAD in the acute phase, defined as within 2 weeks of presentation, is another significant risk factor for the development of SCI compared with TEVAR carried out for chronic TBAD. Case series reporting on the endovascular treatment of acute, complicated TBAD have demonstrated SCI rates of as high as 15%.9,10 These results are similar in registry data for thoracic devices, with rates of SCI in the treatment of acute complicated TBAD reaching 6% to 8%.11,12 Multicenter studies have repeatedly demonstrated double the rate of parapalegia13 and SCI14 in acute versus chronic TBAD treatment. A meta-analysis from 2013 reported SCI risks of 1.5% associated with endovascular treatment of chronic TBAD and 4.2% after treatment of acute cases.2 TEVAR in the acute phase is frequently carried out for complicated TBAD in a patient who is more likely to exhibit episodes of hypotension with consequent reduction in spinal cord perfusion and increased susceptibility to SCI. Another important factor dictating higher SCI rates may be the fact that patients who require TEVAR necessitating coverage of the LSA are less likely to have prophylactic LSA revascularization in the acute scenario.9,15 Finally, delaying TEVAR to the chronic phase may allow intercostal collateralization and protect against SCI after aortic coverage.

LSA REVASCULARIZATION AFTER TEVAR FOR TBAD

A large proportion of TBADs originate at, or just distal to, the LSA; consequently, establishing an acceptable proximal seal zone in healthy aorta for TEVAR necessitates coverage of the LSA in these cases.16 Given the contribution of this vessel to the blood supply of the spinal cord via the anterior spinal artery, it would seem logical to assume that LSA coverage without routine revascularization may influence spinal cord outcomes. Although multiple studies have aimed to address LSA management, conclusive evidence for a benefit associated with routine LSA revascularization prior to coverage remains elusive. A Cochrane review published in 2016 was unable to provide any guidance on this matter due to the lack of good-quality evidence.17 Two meta-analyses have described the outcomes of LSA management in TBAD repair.18,19 Both of these studies demonstrated trends toward higher paraplegia rates with coverage of the LSA. Revascularization of the LSA was associated with lower SCI rates, but these were nonsignificant trends and the studies collated were of relatively poor quality.

The Society for Vascular Surgery and European Society for Vascular Surgery practice guidelines suggest revascularization of the LSA in all elective cases and expectant revascularization in the acute scenario, but both guidelines acknowledge a lack of quality evidence to support these recommendations.25,26 Given the likelihood of reintervention after the index TEVAR for TBAD, however, it would seem prudent to adopt an aggressive LSA revascularization approach in stable patients to protect against future risk of paraplegia with interventions that will necessitate further aortic coverage. It is the authors’ belief that total endovascular solutions, such as an off-the-shelf LSA branch, that facilitate routine LSA revascularization would be an invaluable adjunct for TBAD treatment.

Extensive endografting of the thoracic aorta is associated with higher SCI rates, particularly with concomitant LSA coverage without revascularization.8,27 Limiting the extent of aortic coverage at the index TEVAR for TBAD can, however, increase the likelihood of persistent false lumen flow and the need for secondary interventions.28 Although some authors suggest a critical length of coverage of 150 mm, beyond which the risk of paraplegia significantly increases, it is more likely that this risk exists on a continuum, increasing as aortic coverage increases.19 This point is noteworthy in light of current trends toward coverage of the entire thoracic aorta to the level of the celiac artery to promote false lumen thrombosis, improve aortic remodeling, and reduce long-term aneurysmal degeneration. This strategy, however, may come at the cost of higher paraplegia rates.

The Zenith Dissection endovascular system (Cook Medical) for the treatment of aortic dissection is a modular system consisting of a proximal component, the Zenith TX2 Dissection thoracic endovascular graft, and a distal component, the Zenith Dissection endovascular bare-metal stent. The stent graft covers the proximal entry tear, depressurizes the false lumen and redirects flow into the true lumen. The distal bare stent, extending below the visceral/renal arteries, expands the distal true lumen and stabilizes the intimal flap. This is known as the PETTICOAT technique. The STABLE I study, a multicenter experience with this technique, reported false lumen thrombosis in 59% of patients and was associated with an SCI rate of 2.5%.29 STABLE II was a prospective study examining the PETTICOAT technique in acute, complicated TBAD and reported SCI in four (5.5%) patients.30 Both studies reported SCI rates consistent with or slightly lower than those reported in other trials (6%–8%) and the SVS data set (9.4%).30

In our recently collated multicenter European experience of 121 patients treated for acute and chronic TBAD with the Zenith Dissection endovascular system (unpublished data) five patients (4.1%) developed paraplegia. All cases of paraplegia were in patients treated acutely. There were no instances of paraplegia in the 34 patients in whom the PETTICOAT technique was used. In this cohort, the length of covered stent graft used was shorter than in the remaining 87 patients who did not have concomitant use of the Zenith Dissection endovascular bare-metal stent.

THE ROLE OF CEREBROSPINAL FLUID DRAINAGE

Perioperative cerebrospinal fluid (CSF) drainage has been shown to reduce paraplegia after open thoracoabdominal aortic surgery.31 Its role during TEVAR is less clear. A recent meta-analysis demonstrated a modest benefit for prophylactic CSF drainage for endovascular treatment of thoracic and thoracoabdominal pathology associated with a reduction in SCI rate from 2.5% to 1.5%.32 It was noted that patients in whom spinal drains are placed as a rescue measure in an attempt to reverse paraplegia have significantly worse outcomes than those in whom prophylactic drainage is instituted. Up to 20% of rescue cases were discharged with residual neurological impairment.

CSF drainage carries a small but significant risk of complications including epidural hematoma, intracranial hemorrhage, infection, and catheter fracture/retention, hence it should be considered in select cases where TEVAR is deemed to be associated with a high risk of paraplegia. These include cases treated in the acute phase in which coverage of the entire thoracic aorta is planned and the collateral supply to the spinal cord is also impaired, for example because one of the internal iliac arteries is occluded. An additional role for CSF drainage in the future may be to facilitate continuous sampling of spinal fluid for measuring biomarkers that herald the onset of SCI, but this concept remains a subject of research at present and is not in clinical use.33

Near-infrared spectroscopy, a technique that measures blood flow to the paraspinous musculature, can also herald SCI and may be a useful adjunct that dictates the duration of CSF drainage in cases that are high risk for paraplegia.34

Although the risk of paraplegia after TEVAR for TBAD is lower than that associated with repair of degenerative aneurysms, the incidence of this devastating complication remains significant. Given the need for extensive aortic coverage in the majority of patients, ensuring flow through the collateral spinal circulation and judicious use of adjuncts, such as CSF drainage, are important in this cohort. 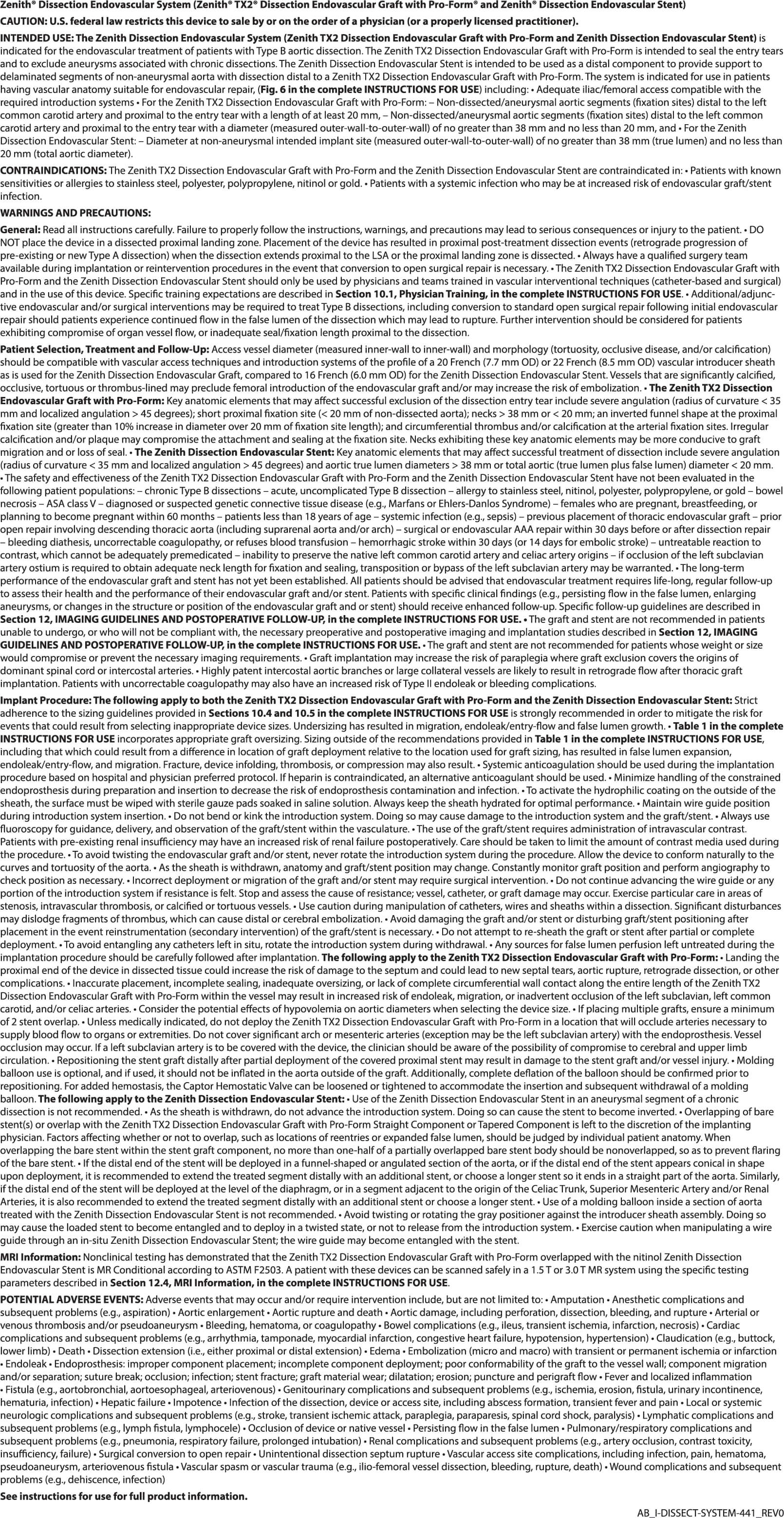