Our stories: Art in the neighborhood

Editor’s note: We believe that it’s possible to do good business while doing good in our communities. We’re proud to work in collaboration with partners on a community development effort by building both a manufacturing site and a grocery store in Indianapolis. Located at the northwest corner of 38th Street and Sheridan Avenue, the project will help people and communities reach their full potential. The story below is one of many stories about the impact of this project. Find out more: www.38thAndSheridan.com. 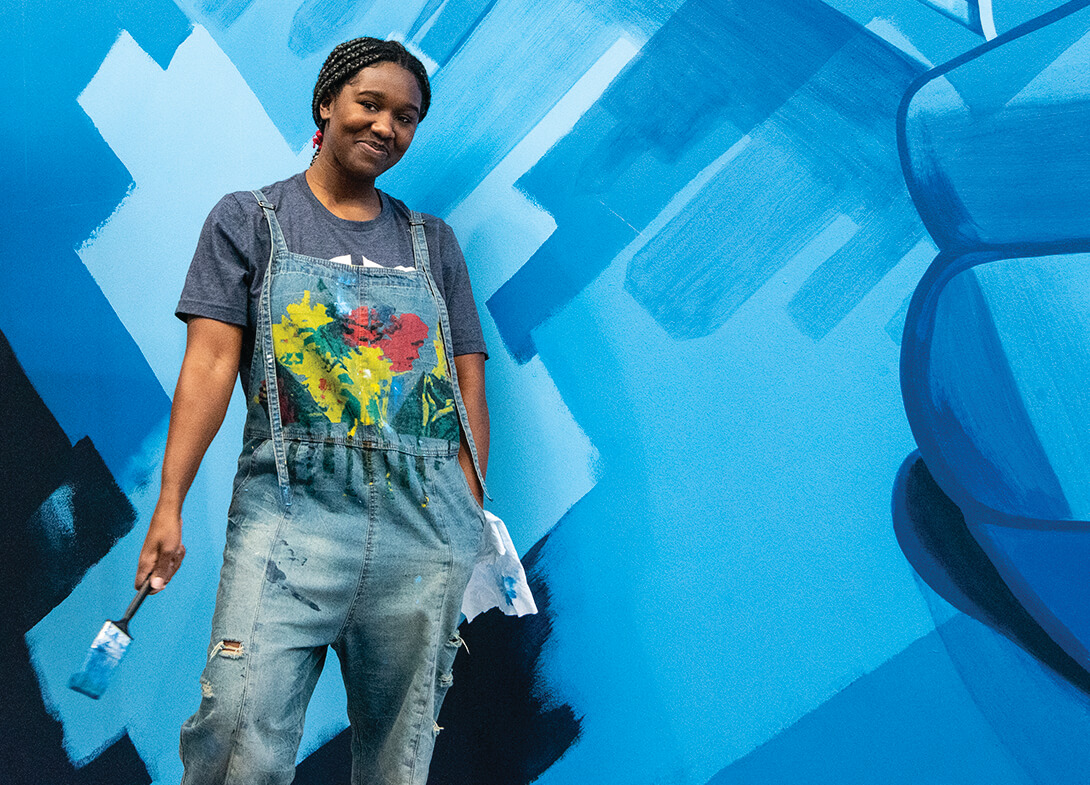 Colors surrounded Amiah Mims as a child. Growing up, Amiah encircled herself with a multi-hued array of crayons andmarkers. She was always coloring and drawing, and her creative talent blossomed early. She was also naturally athletic to the point where, Amiah described herself as a “busy body.” Her parents first placed her in ballet. Finding that environment too structured for their imaginative daughter, they placed her in gymnastics. She excelled in the free form acrobatic sport, becoming a gifted gymnast.

Born and raised on the northwest side of Indianapolis, she left the area to pursue a degree at Kent State University. Carrying her vibrant creativity and athletic expertise with her to college, she was given a full-ride scholarship for gymnastics, and at first, majored in fashion design. After her first semester, she quickly realized that fashion design was not what she thought it would be. She switched her educational track to graphic design, which was a much better fit for her vivid imagination and her love of artistic ideas and creative problem solving. She graduated in 2015 with a major in visual communication design and a minor in photo illustration. Returning to Indianapolis, she immediately settled into a career as a graphic designer for the Indianapolis Motor Speedway (IMS).

From gymnast to artist 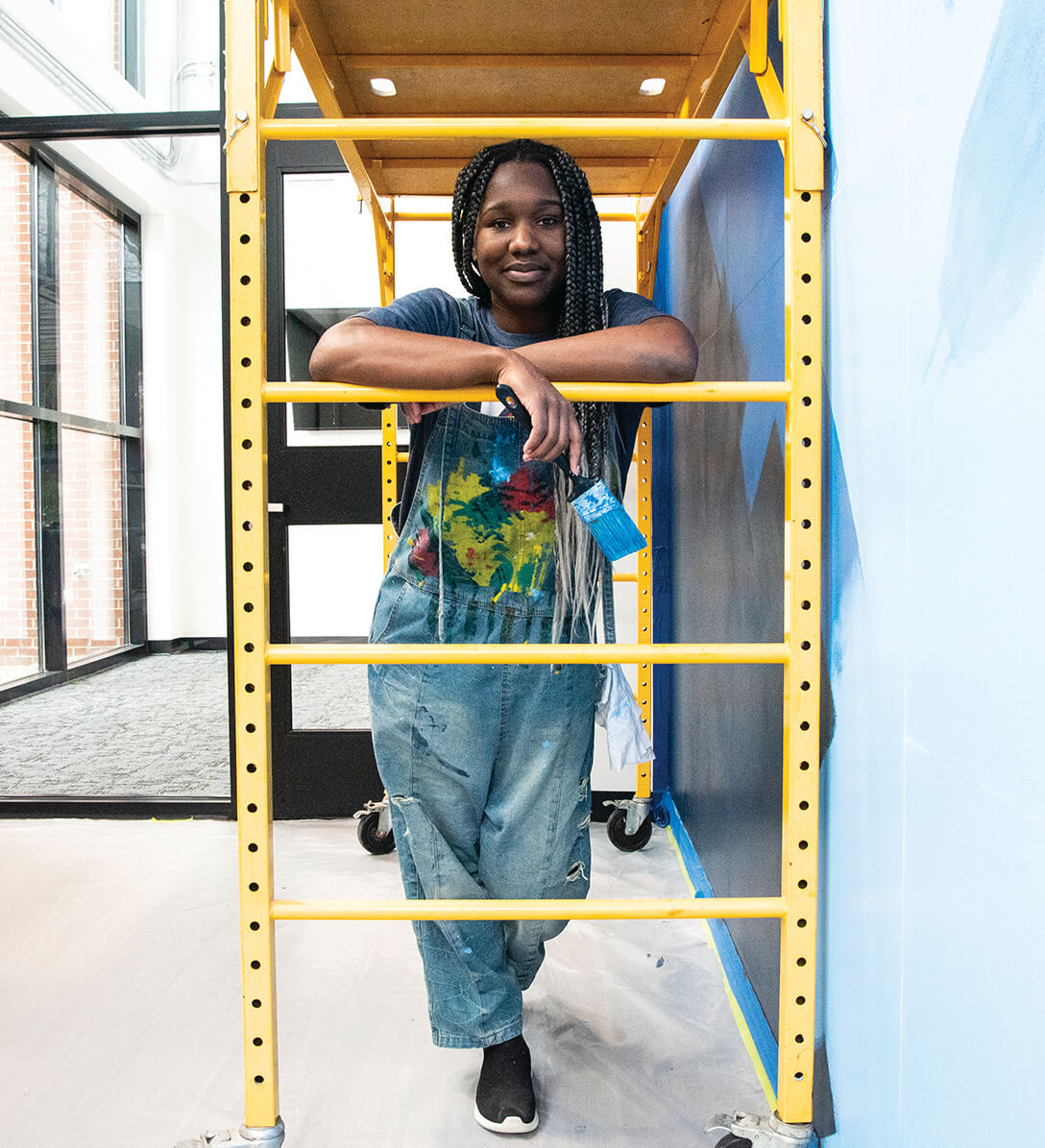 Nurturing her creative art muse fell to the wayside as she focused on her gymnastics team, schooling, and social activities during college.

“Being a gymnast,” Amiah said, “that was me for a really long time.”

She just didn’t have time to invest in the artistic side of herself, but now appreciates her transition from being focused on the athletic life to the artistic life.

“We’ve all got our jam,” Amiah said. “We’ve all got things we’re good at. It’s been nice have the artistry to fall back on. I know a lot of other teammates and other athletes who experience a weird identity crisis once their sport is over. I feel like a lot of people who don’t have something to fall back on have a tendency to struggle in figuring out what to do with themselves once that sport life is over. I’m very lucky to have this other category of talent because I do think that it’s helped me a lot in that post-college, life-after-sport transition.”

Recently, Amiah has had the opportunity to tap into what she calls her organic, artistic ability. She left her position at IMS almost a year ago to start her own creative services company. As a full-time freelancer, she offers graphic design services, has time for painting, and works as a commissioned muralist. The connections she made through her IMS work have proven to be a source of networking for her budding business.

“So far, I’ve been getting a pretty healthy dose of projects from different clientele I came in contact with at IMS,” Amiah said. “IMS is affiliated with many businesses in the city, being the hub that it is of Indianapolis. I still stay in contact with them and still work with them on different projects.”

Currently, she is serving as the guest curator for the Sleek: The Art of the Helmet exhibit at the Indianapolis Motor Speedway Museum, helping to coordinate the exhibit opening in July 2022 during the Brickyard 400 NASCAR weekend. The exhibit features the evolution of material usage and design of the racing helmet. A series of 27 helmets will be featured.

Amiah is also currently working with The Arts Council of Indianapolis (Indy Arts Council) on their upcoming Art & Soul speaker creative series, assisting with branding the event, along with miscellaneous graphics projects, often stemming from her contacts with people from the racing community.

A former colleague led Amiah to be the commissioned artist for two murals at the Goodwill Commercial Services manufacturing facility on the 38th and Sheridan Project, which will produce devices for Bloomington-based Cook Medical.

“It sounded like an amazing experience and something I wanted to be a part of especially considering this whole project has been put together using minority businesses,” she said.

Amiah is a relatively new muralist. The murals for the 38th and Sheridan facility are only the sixth and seventh murals that she has completed. Her first mural was completed in 2020 as part of the Indy Arts Council’s Murals for Racial Justice project. The project commissioned 24 Black artists, among them was Amiah.

“They invited Black artists to come express ourselves truthfully and visually, to amplify the communities’ cries for racial justice,” she said. “That was really the kick start to an introspective journey I have been on with my art. That was a hard time for the Black community. At the time, it was so raw and heavy. I remember hearing about the call for artists for this project, and I thought, ‘Oh, I need to do this.’ It wasn’t a ‘want,’ it was like a ‘need.’”

“I painted the first ‘A’. That was my letter. I put everything I had into that. My mural was inspired by Maya Angelou’s Still I Rise poem,” said Amiah.

The next mural Amiah completed was her largest project. The Indianapolis Recorder newspaper hired her to design a mural on the side of their office building.

“That was huge,” she said. “I tag teamed with my dad, who has a background in commercial and industrial construction for that one.” 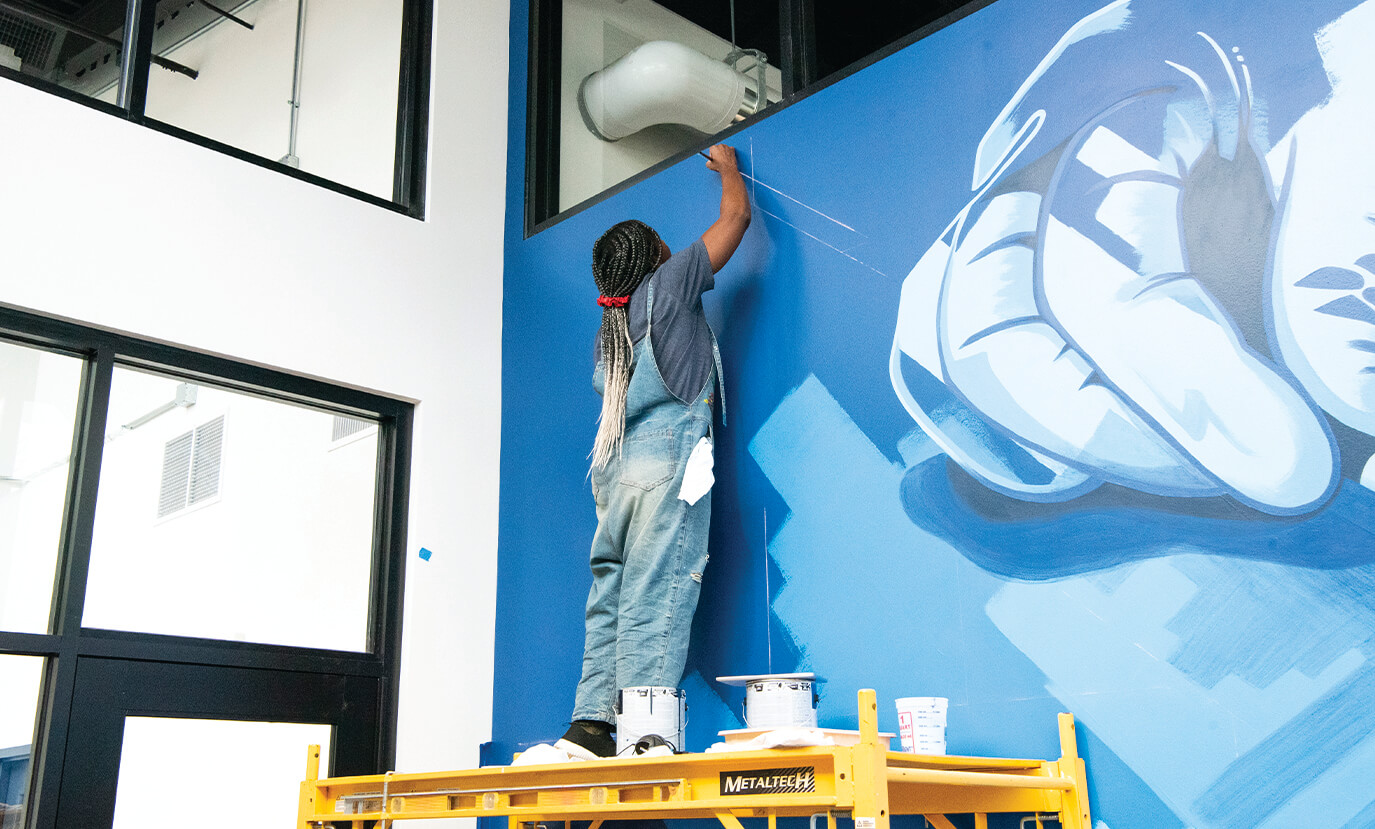 Her father helped her navigate the 20-foot ladders and scaffolding needed to complete the project.

“Now that I’ve done that, honestly, every other mural is like, ‘Ok, I can do that,’” she added, laughing.

She also created a mural for an art walk at Clay Terrace in Carmel. The commission from that mural stemmed from an art collective of the 18 artists that participated in the Indiana Avenue street mural. The artists, known as The Eighteen, were hired by Clay Terrace, who partnered with GangGang cultural agency, to design the art walk.

Behind the mural scene

With her experience in community mural designs, Amiah was a natural fit as a muralist for the 38th Street and Sheridan facility. The project encompassed all the challenges and hurdles and lessons she learned from the Indianapolis Recorder mural project and her other projects.

She remembered her father’s guidance about the use of scaffolding, how to raise the levels, and how to put the brakes on, so she was well prepared. Her process for her mural creations developed over time and experience. She normally sketches the art work first digitally and uses a projector to project the design that she traces with chalk and then fills in with paint.

With the Goodwill murals; however, she could not take her normal approach. 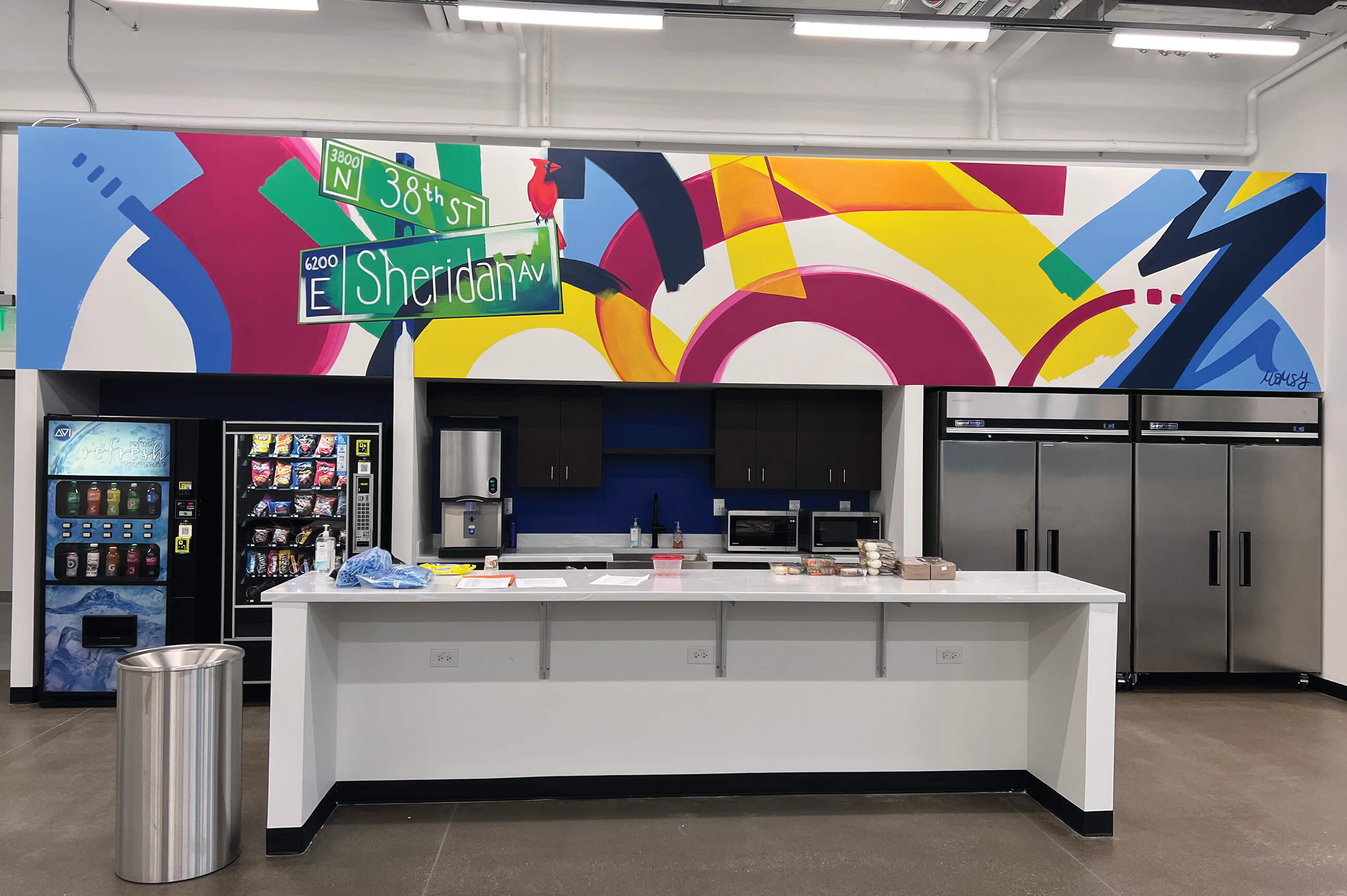 She was commissioned to design two murals—one in the entryway of the main entrance to the facility and one in the break room. It was almost a month-long process. She began the project on March 14 and finished it on April 8.

“I didn’t have enough room in that entry way area to be able to project the way that I needed to, so I actually went ‘old school’ with that and used a good ol’ grid, an inch-to-foot grid,” Amiah said. “I used the grid and free handed it from there. It ended up turning out just fine, it added on a little extra time but it was all good. We have to make things work with what we’ve got.”

Working closely with the creative department from Goodwill Commercial Services, she understood the goals for each mural. The entryway mural needed to hint at what would be seen in the manufacturing facility, since tours would be common in the facility. The mural needed to give people a sneak peek, she said, of what people could expect to see during the tour. 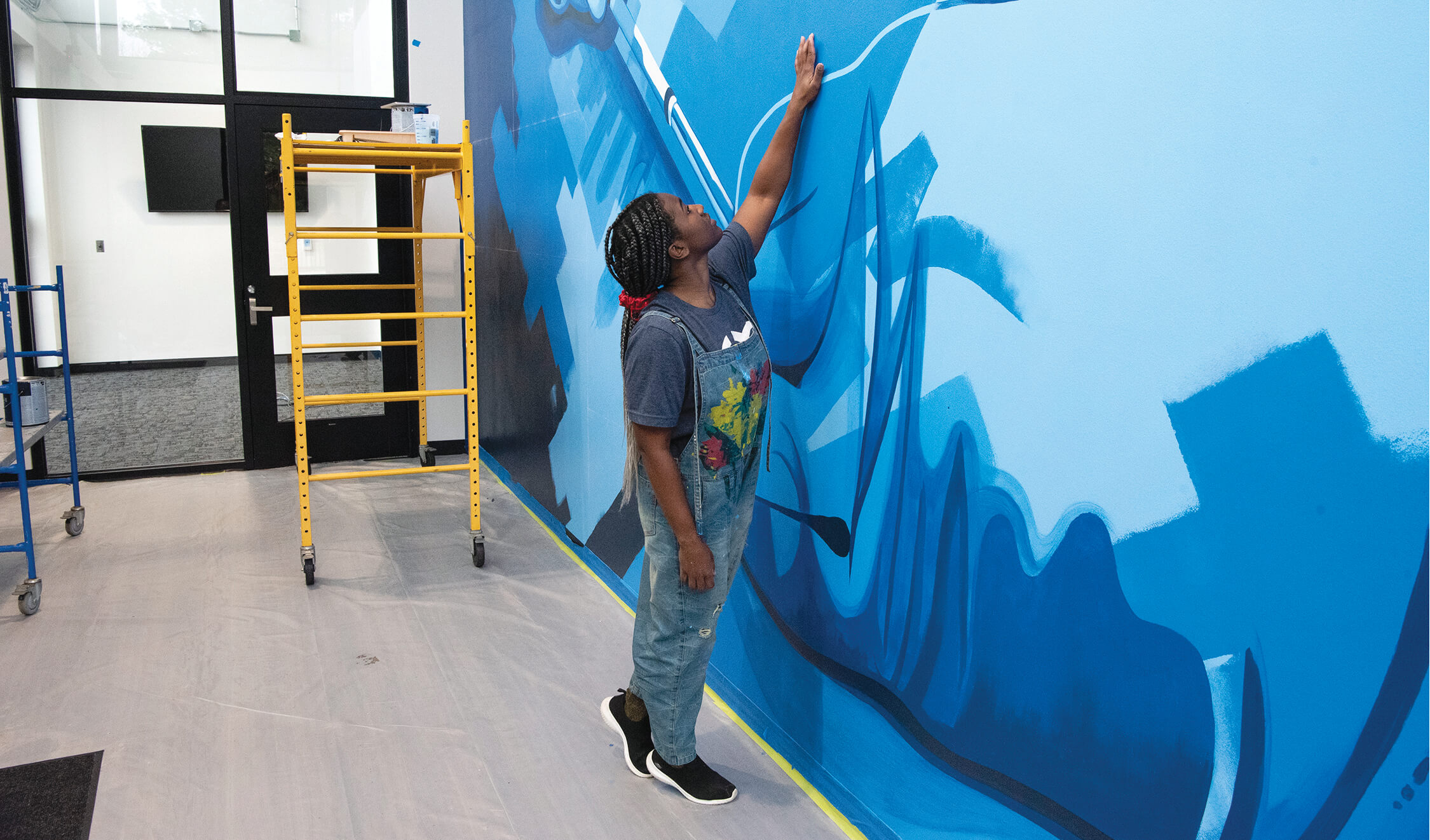 “With it being a medical manufacturing building, we landed on a design with hands, since the manufacturing jobs are very hands on,” Amiah said. “We went with a very close up composition of two gloved hands holding a catheter, one of the medical devices that is manufactured at the facility. I also added a little surreal hidden gem, a skyline of Indianapolis reflected in the shadow of the medical device to tie it back to the city.” 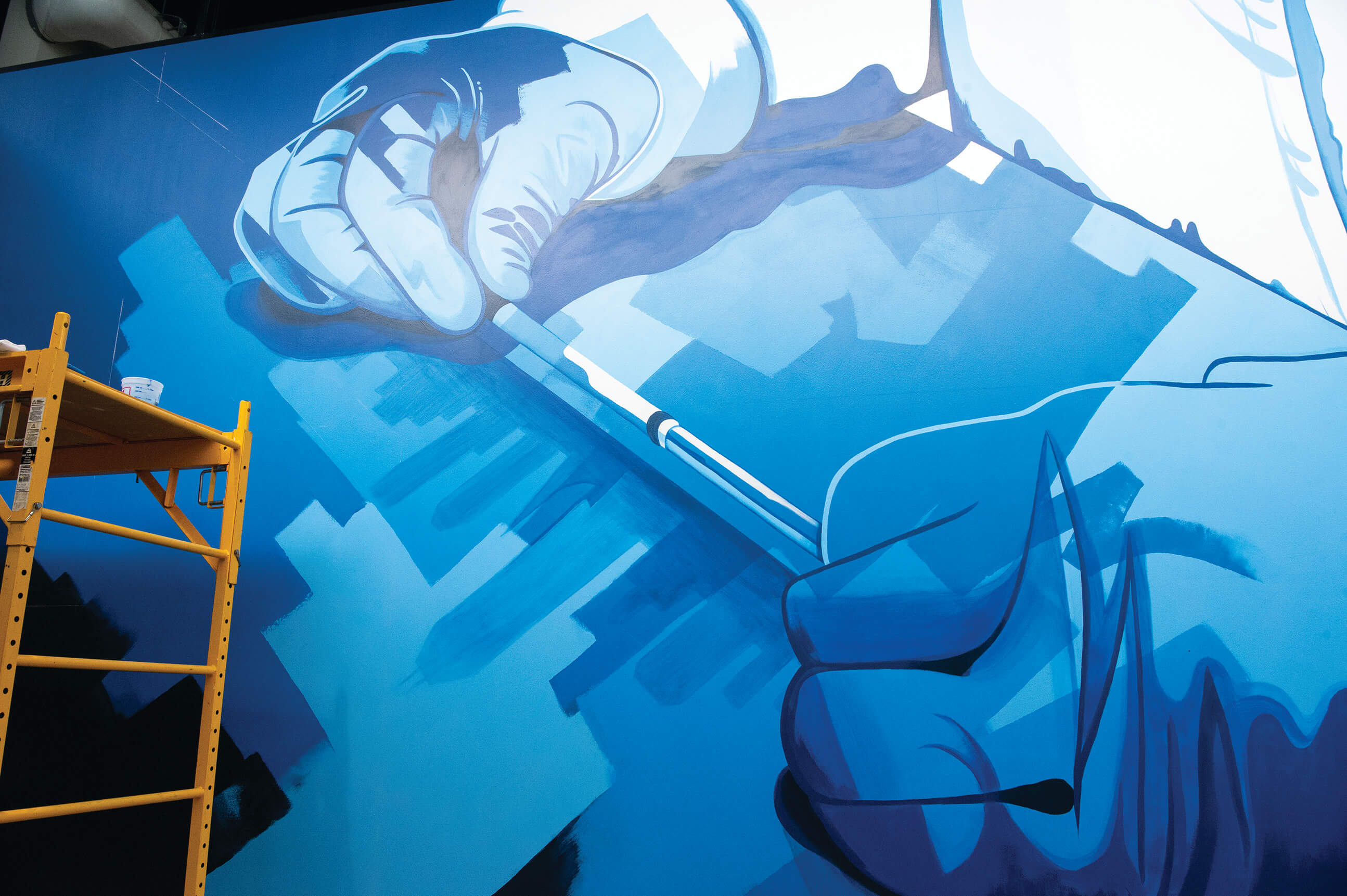 For the break room mural design, Amiah decided upon a bold 38th and Sheridan street sign as the main element surrounded by bright colors. She painted a cardinal perched on the sign to bring in an Indiana theme.

“We wanted to design it so that it reflected a dash of civic pride,” Amiah said. “When people enter this space, they know where they are. It brings in that pride. For the people who work there it’s important for them to know where they are and to know it’s theirs in a sense. We put it there for them. The building is built for them, for those workers, for the neighborhood, and to bring jobs to them.”