Our stories: The storm will pass

Editor’s note: Shanghai has begun lifting a strict, two-month lockdown that was designed to contain rising Covid cases. We want to share an interesting story about a group of Cook employees and their dedication and personal sacrifice to help get products to patients during a difficult time. As of June 1, 2022, with new de-escalation policies in place from the Shanghai government, all of the Cook employees have returned home. 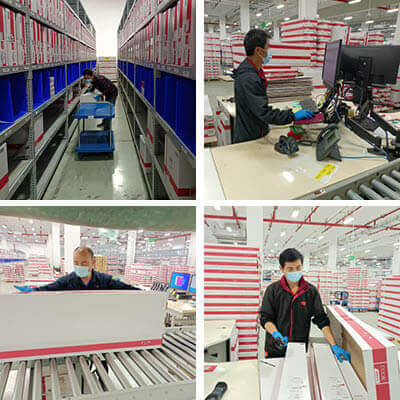 Cook employees who volunteered during the lockdown.

Between the end of February and the end of April, 2022,1, Shanghai had recorded more than 500,000 coronavirus infection cases. To confront the city’s largest-ever outbreak, Shanghai entered a “phased lockdown” at 5:00 am on March 28, first starting in Pudong (the eastern part of the Huangpu River), and then to Puxi (the western part of the river). What this meant to Cook was that both Cook’s bonded and non-bonded distribution centers in Shanghai were not operational until official notification by local authorities was received.

The lockdown event was initially slated to be lifted on April 5. However, with infection cases skyrocketing daily and the government committed to staying on course with its dynamic zero-COVID strategy2, the lockdown was extended indefinitely with stricter controls in place.

Our distribution center: the anxious waiting

Considering the immense impact on our customers and patients, the question of when to reopen the distribution center was on everyone’s mind. On April 11, the Shanghai municipal government announced the city would be managed based on risk level categories, which mainly include the lockdown areas (high risk), the controlled areas (average risk), and the precautionary areas (low risk). The district in which our two warehouses stand was classified in the precautionary area. Because we were fortunate to be in the category with the lowest risk, Tony C., Supply Chain manager of Cook China and the China team, began to explore ways to secure permits for Cook to resume operations.

While waiting for confirmation and approval from the relevant authorities, the distribution center team started to discuss seeking onsite support from volunteer employees. Obviously, it would be a huge challenge for everyone, since, according to the local prevention and control policies, enterprises that wanted to resume operations had to follow the “closed-loop management” mode to minimize the risks of the virus spreading in the neighborhood. This meant that our employees who returned on-site would need to stay in the warehouse for an unknown period of time and not return home.

“Despite the known difficulties, we saw an amazing number of employees putting their hands up to support the business crisis. Due to the differentiated risk levels and the employees’ living compound categorization, not everyone was allowed access. However, I was very touched and extremely proud that my team showed little hesitation in stepping forward and demonstrated willingness to endure the hardship,” Tony said.

April 15 was the day to remember, as Chenhua Z., Junning W., Haihong X., and Chuanjia Y. dragged their luggage full of personal belongings, including quilts, clothes, and toiletries, to the distribution center after receiving the green light from the local government authority.

“The daily needs of the employees need to be considered, from ensuring a steady supply of food and drinks to proper bedding and showering facilities, which were lacking at the current facility. The local team had managed to secure a catering vendor to help with food delivery. Mattresses were purchased online and were delivered to the team within three days after they moved in. It was not perfect, but we did our utmost to provide the needed support as much as we could and as quickly as we could,” added Tony.

A look at the sleeping setup.

Chenhua, Junning, and Haihong saw one another as “comrades in arms,” as they had been working alongside each other for the last 8—9 years. Chuanjia, though, joined the distribution center team more than a year ago as contract staff, but still shared a close working relationship with the team.

It didn’t take the foursome long to get accustomed to this unprecedented work bubble.

“We were not those folks who just need nice food or comfortable lives. We understood that it was not easy for everyone in this lockdown, so we felt quite appreciative of what we had been provided with right now,” said Junning, who was the first one to arrive at the distribution center.

Seeing unfulfilled orders pile up and increase by the day, the foursome decided to put in extra efforts and hours in the very first week by tackling the most urgent orders first and getting as many orders as they possibly could out of the distribution center. Cook’s motto has always been “patients first,” and the team really demonstrated the spirit of this. Thanks to everyone’s hard work and determination, the first batch of orders since the lockdown was successfully delivered to our customers on April 20.

While touching base with the on-site team daily to ensure they were coping well, Tony and his team also checked in with the bonded warehouse employees to discuss their thoughts and feelings about if and when access to the bonded facility would eventually be granted. Again the team showed dedication and a willingness to support the business. Baofei H., supply chain supervisor of Labeling operations, was soon granted access, on April 25, and has also since moved into the bonded warehouse.

The storm will pass, but the choices we make will influence the years to come.

In recent days, we have seen infection rates decline, and the local government has begun loosening restrictions by permitting more applications from businesses to resume work. On April 26 and 28, two more Cook contractors, Huihua W. and Xulong L., were allowed access and joined Baofei in the bonded distribution center. Since then, others have also joined the bonded warehouse and the unbonded distribution center. 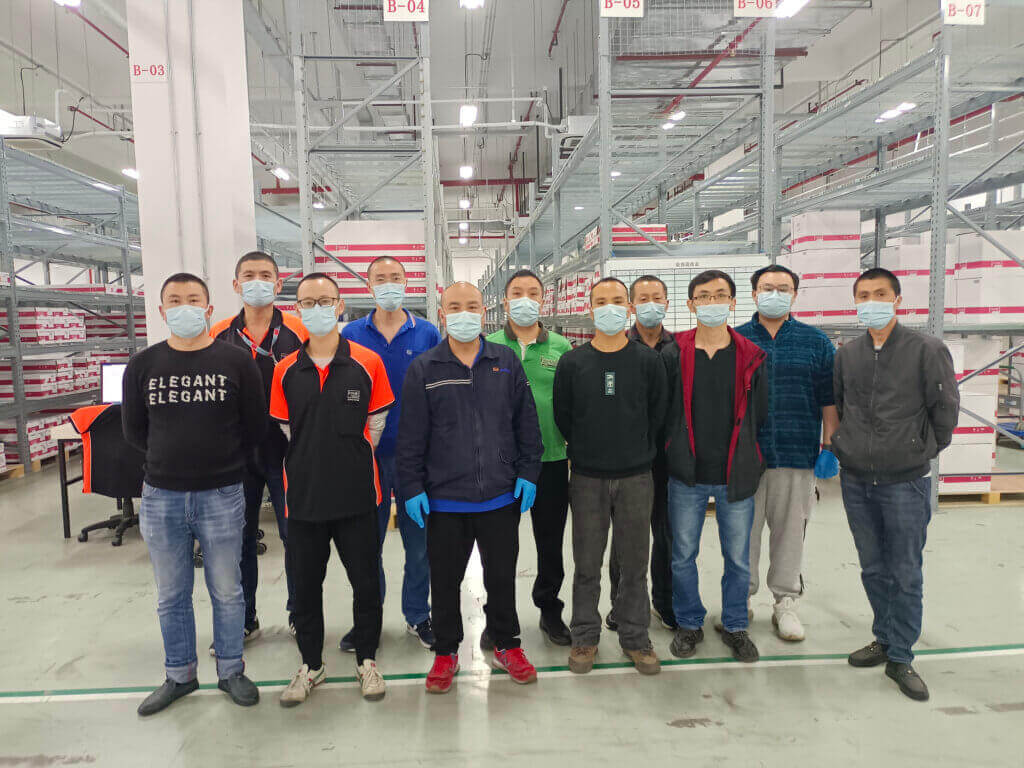 We know for sure this lockdown will not last forever. When the time comes and the lockdown is lifted, people will finally meet again. If there is anything that will remain in our memories when this difficult period of time ends, for many of us at Cook, it will be our people’s thoughts of genuinely helping one another and supporting our vision to put patients first in what we do. As Haihong shared when he was asked why he was willing to volunteer, he said it was natural to help out when people or the company was in difficulty. It’s just something that people do naturally because it is right. 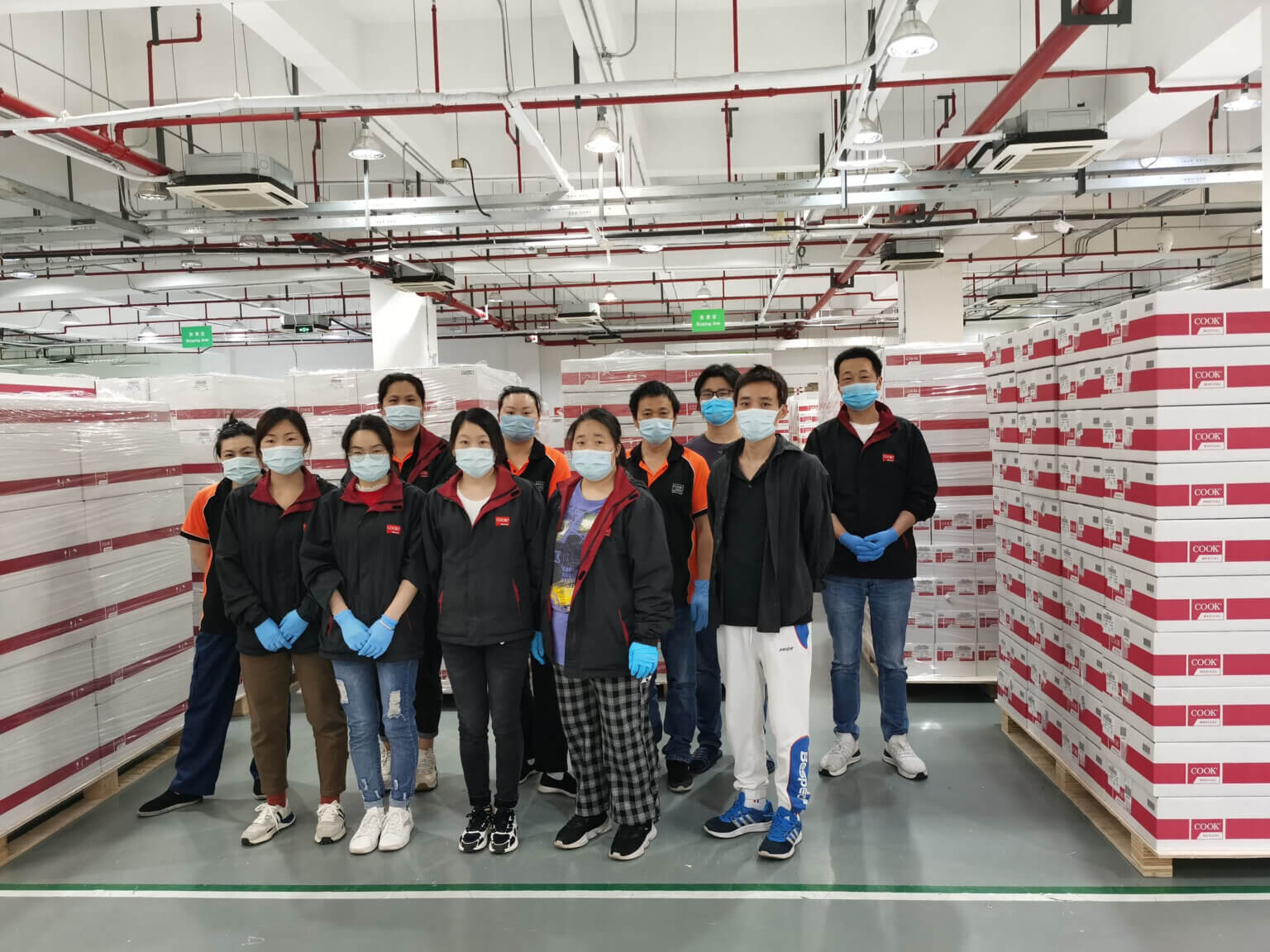